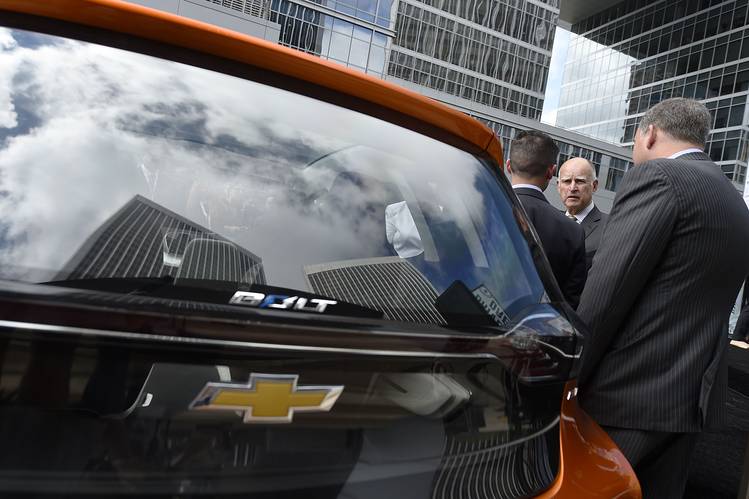 
has unveiled its Chevrolet Bolt at the Consumer Electronics Show here, the auto maker’s latest electric vehicle aimed in part at making inroad’s with the brand​in California and urban areas.

GM is positioning the Bolt, with a range of 200 miles, as a mainstream electric vehicle that will further the auto maker’s technological bona fides. GM has said in the past that the car would be priced roughly at $38,000 and cost around $30,000 after the federal $7,500 income-tax rebate for electric car purchases.

The vehicle comes at a time when Silicon Valley startups are trying to disrupt car makers with ride-sharing services. And electric cars and other alternative-fuel vehicles face challenges amid plunging prices at the gas pump.

“The Chevrolet Bolt represents the first serious electric vehicle available to mainstream consumers,” Karl Brauer, senior analyst at Kelley Blue Book said. “It will be an interesting test to see how the market embraces the Bolt in this era of cheap gas; But from a value and function standpoint, it sets a new benchmark in alternative-fuel options.”

​GM’s Chevrolet Volt electric-car model, introduced several years ago with a shorter range, hasn’t been a big seller. The Volt marked GM’s return to the electric-vehicle market, and the Bolt aims to garner wider appeal.

“There are certain states in the U.S. where you need to sell electric vehicles if you’re going to be able to sell your total portfolio. As part of that, we have a need to have a range of electric vehicles,” Mr. Batey said.

“People think that the only reason people buy these is because of high fuel prices, but if you actually talk to the consumers, they buy it because they want the greatest and latest technology, and it just happens to be an electric vehicle,” he added.

Mr. Batey said the Bolt ​is crucial to overhauling Chevrolet’s image in California and large urban markets, where it​has performed poorly in recent years. He said the Volt has done more to reposition the Chevy brand in California over the past five years than any other vehicle.

“For Chevrolet, California is a massive opportunity because our performance there has been poor for so long,” Mr. Batey said. “Bolt will play a really important role in helping build the Chevy brand in California.”

The Bolt also fits into GM’s larger strategy to embrace new transportation technologies like ride-sharing and autonomous vehicles and includes features like one-pedal driving mode and saved settings for multiple drivers controlled through their smartphones.

GM this week unveiled a $500 million investment in Lyft Inc. with the eventual goal of developing a driverless-car hailing service. Mr. Batey said Lyft officials were impressed when GM showed them the Bolt.

One way GM may take advantage of its new relationship with Lyft is by creating hubs where Lyft drivers who don’t own vehicles can use them for a few hours. Mr. Batey said GM has a huge fleet of company cars, off-lease vehicles and rental cars that could be deployed for that purpose. GM may also provide a new car program for Lyft drivers that would feature the Chevy Bolt.

Mr. Batey played down expectations for large sales volumes with the Bolt. He said GM sees the car as a way to reintroduce the brand to consumers that haven’t interacted with it in some time.

Speaking at the Consumer Electronics Show on Wednesday, GM CEO Mary Barra unveiled the Bolt and said its combination of technology and affordability would help push electric vehicles into the mainstream.

She said GM’s scale, dealer network and manufacturing experience gives it a leg up over newer entrants to the car business, a veiled reference to electric-car maker Tesla Motors Inc.
TSLA


She specifically noted that Bolt drivers wouldn’t need to drive to the next state to buy or service their vehicle.

“Commitments from traditional car makers to build electric vehicles advances Tesla’s mission to accelerate the advent of sustainable transportation,” a Tesla spokesperson said. “We hope to see all those additional zero-emission vehicles on the road.”