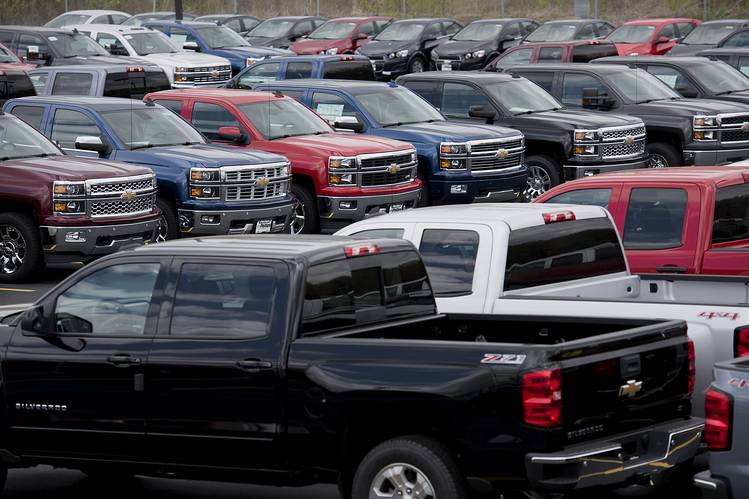 
said its world-wide sales fell 3.1% in the third quarter, only the second decline after more than two years of steady increases, amid continued weakness in Asia and South America and a reduced presence in Russia.

The largest U.S. auto maker sold 2.33 million vehicles in the period ended Sept. 30, down from 2.41 million in the same quarter a year earlier. Surging sales in North America of pickup trucks and sport-utility vehicles fueled by cheap gasoline and low interest rates helped stem the decline.

GM’s sales in North America rose 5.2% in the quarter, and the Detroit-based car maker posted a 1.1% sales gain in Europe.

But sales in South America, which has been broadly pressured by economic and currency-exchange problems, plunged 31%. In GM’s Asia-Pacific, Africa and Middle East business unit, sales dropped 10%. Its General Motors China unit posted a 4.2% decline.

Chevrolet, GM’s biggest brand associated with the popular Silverado pickup truck, logged a 9.5% sales decline in the quarter despite record crossover sales in the U.S. and a 16% increase in truck sales in the company’s home market.

Sales for Buick, a brand GM nearly axed as part of a 2009 government-brokered bankruptcy restructuring but kept largely due to popularity among Chinese consumers, rose 3.8%. Buick posted record sales through the first nine months of the year in China, GM said. At Baojun, GM’s Chinese brand, sales nearly tripled to roughly 111,000 vehicles.

The GMC brand, comprising higher-end pickups and SUVs, logged a sales gain of 6.7% for the quarter.

GM and other auto makers are benefiting from some of the strongest U.S. demand in years. Shoppers are enjoying low interest rates, cheap gas and a strengthening economy, spurring new-car demand. GM sales in North America were up 4.9% through the first nine months of this year. International markets have proved more challenging. GM earlier this year decided to abandon Russian production and scaled back operations elsewhere.

For the first nine months of 2015, GM said its volume fell 1.3% to 7.15 million vehicles on declines in every market except China and North America. The Chevrolet brand took a big hit, falling 7.1%, after GM pulled it out of Europe to focus on its Opel brand there. Overall, European sales fell 6.3% versus a year ago.

GM President Dan Ammann said the auto maker aims to be disciplined about where it invests. “We have reacted quickly to challenging macroeconomic environments in other markets and have shown the discipline to exit situations where we see no long-term path to acceptable returns,” he said in a statement.

In China, GM is encouraging sales of higher-margin crossovers and SUVs to limit fallout from weakening demand in the world’s largest auto market. Sales of crossovers like the Chevrolet Trax and Buick Envision now represent 17% of GM sales in China, up from 6% a year ago. Meanwhile, Cadillac, GM’s luxury brand, had record sales in China, up 12% at nearly 57,000 vehicles.

GM in Europe touted recent product launches like the Opel Astra, which represents a significant portion of its sales there. The new Astra could help GM grab market share from Volkswagen AG
VLKAY


as Europe’s largest auto maker contends with fallout from its emissions-test scandal.

Write to Gautham Nagesh at gautham.nagesh@wsj.com and Chelsey Dulaney at chelsey.dulaney@wsj.com