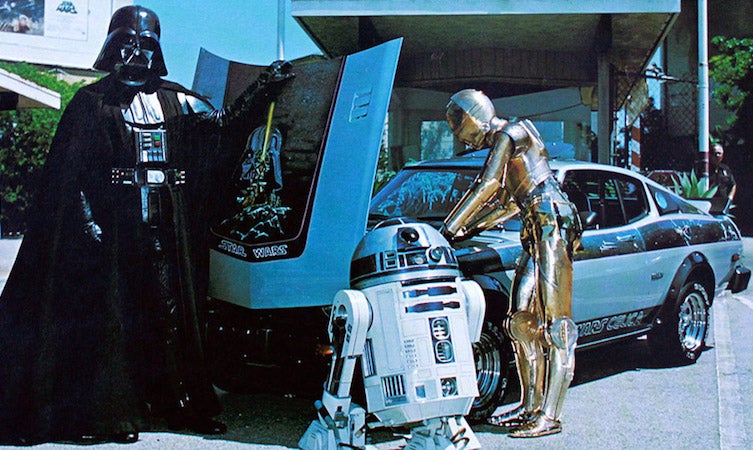 When the first Star Wars movie came out in 1977, Toyota had a Celica painted and sticker’d up with Darth Vader and friends (technically enemies, actually.) The car was given away, the creators got mired in legal trouble, and now that we’re riding a fresh wave of Star Wars PR somebody wants this thing back.

Man, remember when you could get a car for $2,997 that got 38 MPG? Granted, that’s more like $12,000 today. And the ’77 Corolla would not do well by today’s crash standards. And who knows if those MPG ratings were worth anything. But still. Nostalgia.

Incredibly, the blog Speed Hero seems to have a pretty complete history of the Star Wars Celica. They credit John Sladek, then-owner of Delphi Auto Designs, with doing up the concept art.

Then apparently things got interesting at Delphi; Speed Hero says the company’s main investor was arrested for smuggling hash oil, another was kidnapped, a Delphi employee was murdered, and by the beginning of 1978 nobody really knows where the Celica went.

Here’s the car with, allegedly, Delphi’s secretary in 1977. Cute Wesley Crusher onesie, too bad that’s the wrong Star–! Also the wrong decade. Also, have you noticed that women are wearing things like this again? Just Star Wars, all old things are new again.

So will this Celica, if it ever gets tracked down. Toyota GB’s official blog says a Hollywood producer named Dean Shada is now looking for the car and wants you to hit him up if you’ve seen it.

Do you think anybody will ever go looking for or giving a crap about the Minions Mini? Just kidding, I’m pretty sure that’s not real.