Is General Motors (GM) set to break out?

Morgan Stanley’s Adam Jonas thinks so. The analyst picked up coverage of the U.S. automaker with a resounding Overweight rating and a $40 price target. But he also offers up a sum of the parts analysts “to help identify areas of value that can be unlocked for GM shareholders.” 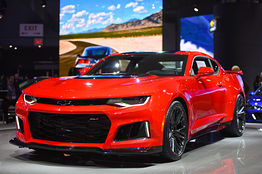 In the right circumstances, Jonas sees GM’s stock price climbing as much as 44% in the next year to $50 a share.

To be clear, Jonas is not claiming to be aware of any specific move on the horizon by GM to exit, monetize or spin-off any specific business. Still, GM bid adieu to Europe in March when it sold its Opel business. And under a scenario entitled “GM Revolution,” Jonas cites a number of assets of interest to outside companies.

Our $50 bull case represents the full SOTP value of the company, which implies strategic multiples for several parts of the business that may be assigned zero value by the market currently. Our SOTP implies GM takes a number of discrete and coordinated steps to isolate, position, and crystalize value through strategic partnerships, spin-offs, divestiture or other efforts…. we believe GM has a number of assets and businesses that are of potentially high strategic value to outside players or partners who are keen on entering the global mobility space. We also believe there are steps that, hypothetically, can be taken to unlock hidden tech value at GM while maintaining some degree of benefit to the remaining business (GM Evolution) through commercial or ownership arrangements. We also have a degree of confidence that senior management at GM is highly aware of the need to consider more radical changes in the business, as evidenced by the decision to exit the European car business. We estimate GM’s global fleet executes roughly 2.5 billion miles per day but the vast majority of these miles are not captured by the company or are in cars that are not capable of OTA firmware updates.

This is not the first time Jonas has hinted about spin offs or a breakup. In the aftermath of the GM’s recent victory over activist Greenlight Capital’s bid to create two share classes, analysts note that the stock’s cheap valuation and the potential spin-off of growth businesses makes it a juicy target for other activists.

GM has been a long time favorite here at Barron’s, primarily for its low valuation and juicy dividend yield. Yesterday, GM told investors it would sell fewer cars this year than it had originally expected. Today, the shares have climbed 1.4% to $34.70.