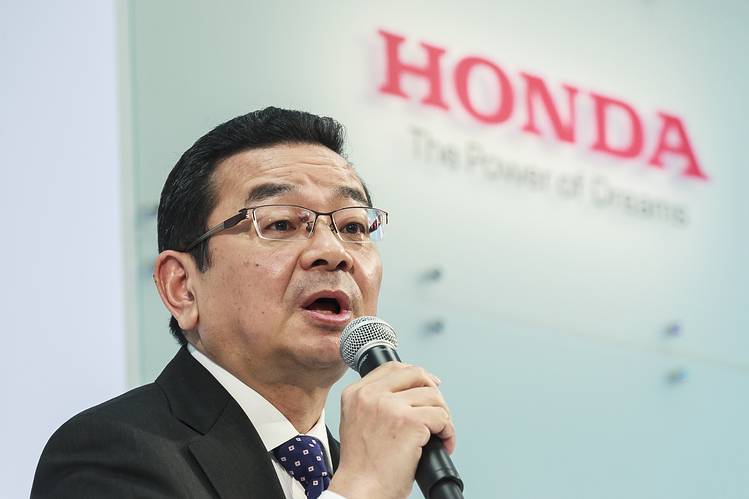 
wants partially or fully electric cars to account for two-thirds of global sales by 2030, its chief executive said, laying out long-term priorities after his inaugural year was dominated by safety issues.

The pledge Wednesday by Honda’s Takahiro Hachigo was the latest sign of the industry’s shift to environmentally friendly cars. The fallout from Volkswagen AG
VLKAY


’s diesel-emissions scandal has fueled the trend, with the German giant ramping up plans for electric vehicles.

Vehicles with electrified powertrains account for about 5% of Honda’s sales today, most of them gas-electric hybrids. The company plans to start leasing a fuel-cell sedan in March and sells a limited number of plug-in hybrids and purely electric cars in the U.S. Mr. Hachigo said hybrids and plug-ins would likely account for about half of Honda’s sales in 2030, while the other electric vehicles would take 15%.

Mr. Hachigo’s appointment was announced in February 2015 after a series of recalls and other safety problems forced Honda to scrap its target of selling six million vehicles annually by March 2017. It has been working to reduce model variations and platforms to give engineers more time to fine-tune technology.

In 2015, the company posted record sales in its two biggest markets, the U.S. and China, and saw world-wide sales rise 6% to 4.7 million vehicles. It expects profit for the year ending in March to rise 3% to ¥525 billion ($4.7 billion), and it has received favorable notices for its new Civic model in the U.S.

Despite the run of good news, some Honda insiders say they fear the company’s longer-range strategy has lost focus as Mr. Hachigo, described by colleagues as a more consensus-oriented leader than predecessor Takanobu Ito, takes his time in putting his stamp on the auto maker.

One former Honda executive said the company has stayed abreast in technology but is no longer an industry leader. That is a potentially risky position for Honda because it is smaller than rivals such as Toyota Motor Corp.
TM


and the Renault-Nissan Alliance and lacks their economies of scale.

Mr. Hachigo said at a news conference that he would shake up development teams to include a person in charge of the design and driving feel of each model.

“People working on production and development have been facing increased hours and workload because we pursued speed and scale that went beyond our capabilities,” he said. “We want to focus our development resources for electrification.”

Honda’s target “is ambitious, but not unattainable with hybrids included,” Christopher Richter, an automotive analyst at CLSA, said in an email. “What it means is that a lot of currently gasoline cars will be hybrids.”

Over the past year, Honda engineers have said the company has been preoccupied with meeting near-term sales targets and resolving recalls. It suffered a series of recalls over the Fit subcompact hybrid, a key global model, involving engine control software and other problems.

Last year, it established a new department bringing together software engineers under one roof. Executives have said the company has added a month to the development timeline of new models to make sure all engineers are on the same page.

Yet Honda is still dealing with fallout. This week, it said it would recall 42,000 Civic cars in the U.S. over an engine-manufacturing problem that could lead to fire. Recalls over exploding Takata Corp.
7312


-made air bags continue to expand by millions of vehicles.

A group of 10 auto makers probing the cause of the Takata problems pointed to a volatile chemical and other factors as the main culprits, according to findings released Tuesday.

Mr. Hachigo reiterated on Wednesday that Honda, Takata’s biggest customer, currently has no plans to offer financial support to the supplier.