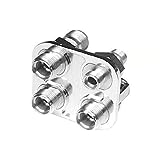 If US Honda was a bakery, it’d be like this: The shelves are full of bread, all pretty good and readily available, but nothing special. But sometimes you’d see an amazing cupcake on the shelf, incredibly detailed and looking like nothing you’ve ever seen. When you ask to buy it, the guy behind the counter smiles and crushes it in his fist.

That’s Honda in America. Sure, there’s nothing exactly wrong with the cars they sell here, but almost all of them — perhaps with the exception of the new Fit — are anonymous, committee-designed competency-boxes that my dentist shows me pictures of to put me under before extracting a handful of bicuspids.

But then I see things like Honda’s newly announced N-Box Slash (or N/). It’s the latest version of their little N-Box Kei car line, and it’s pretty much exactly what I want from a modern car. It’s fantastic on space utilization, it doesn’t look like every other thing on the road, it seems flexible and practical, the design — interior and exterior — manages to have a sense of fun without being ridiculous, and it seems like a comfortable, efficient and practical way to go about that 80% of driving that is utilitarian without being bored to tears.

I love this thing. Just look at these design options you get for the interior theme of the car: Tennessee Session (lots of wood, dark leather), California Diner (red leather, checkerboard), Hawaii Glide (yellow exterior, pale blue interior with stripes), Street Rod, Bright Rod — these variants in color, materials, and trim go a long way to giving the same car a range of characters, and they all seem far too much fun for American Honda to even consider offering.

The exterior is a classic Kei-car one-box design, but with a sort of chop-top/short greenhouse look to make it a look a little less like something from a Richard Scarry book. The side window line —specifically that upward kick of the rear side windows — seems to be a little bit of a shout-out to the old Honda Z600.

Most US-based automotive sites are saying it’s a ‘retro’ look, which I disagree with, but this is a very telling description. The design is quite modern, really, certainly more so than its brother, the N-One, which has a front end definitely inspired by the old Honda N600 of the ’60s and early ’70s. The N-Box Slash isn’t like that — it’s not trying to mimic designs of the past, but it does share one key thing with past designs that Honda (along with most carmakers) have lost — a sense of fun.

I think it’s being called ‘retro’ because it’s not trying to be another cookie-cutter aspirational design. I think we haven’t seen this in modern cars for so long (outside of actual retro designs like the Fiat 500, Mini, or Beetle) that we just assume the idea is from the past. It doesn’t have to be.

The Honda N-Box Slash is Kei car compliant, which means it’s quite small, and has an engine that’s 600cc/64 HP max. Sure, that’s probably not going to fly in the US, but I’d still love to see a slightly uprated version of a car like this make it to our shores. Maybe it’d have to be scaled up.

Though, if Honda could figure out a way to get, say, a 1.5L engine in there and meet US crash regs, it could help free Honda from the “Galapagos” trap of their current Kei cars. See, all Kei cars are basically like Galapagos turtles, in that they can only exist in Japan, like those giant tortoises only exist on the Galapagos islands. Maybe there could be a wider market for clever, space-efficient cars outside of the Home Islands?

Of course, I’m probably just dreaming. The N-Box Slash probably wouldn’t sell that much over here. But I still can’t shake my desire for a small, fun, useful car like this, something with acres more character than a Yaris or a Mirage, and even more usable than a Fiat 500.

I guess I’ll have to hold on to that old 1st-gen xB a little longer, and hope someone at Honda decides to take a risk.