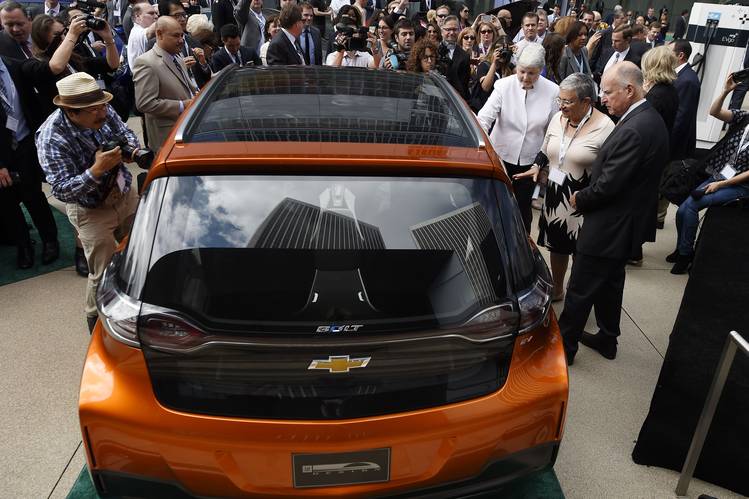 
is poised to play a major role in General Motors Co.
GM


’s electric vehicle strategy, with the Detroit auto maker saying Tuesday the South Korean electronics company will supply nearly all of the powertrain parts and other components for its long-range Chevrolet Bolt.

The Bolt, which GM Product Chief Mark Reuss said will be on sale late next year, will be one of several vehicles sold by mass-market auto makers that carry a relatively large amount of LG content—to help them keep pace with Tesla Motors Inc. and other companies that were faster to move on long-range electric cars. LG Chem,
051910


the battery and materials division of LG, has commitments to supply batteries to Volkswagen AG’s Audi division, Daimler AG
DDAIY


, Ford Motor Co. and other auto makers. LG formed a vehicle components group two years ago, and it is making the other parts.

Tesla, meanwhile, has deep ties with Panasonic Corp., which is the largest battery producer in the world.

LG has been GM’s partner on its electric vehicle batteries since 2008, but in 2011 the partnership evolved as LG began jointly developing an electric car with GM. The agreement on the Bolt—which will be GM’s most capable electric vehicle when it goes on sale—points to LG evolving into an even bigger player in the electric vehicle world, beyond the battery.

LG is supplying 11 systems to the Bolt, including the motor, inverters, the power control module, and the heating and air-conditioning system, as well as the entertainment system.

Along with the battery, which is expected to give the Bolt a 200-mile all-electric range, the combination of parts makes up the most important pieces of an electric car. LG’s deeper push into the vehicle comes as Apple Inc.,
AAPL


a major competitor in consumer electronics, is readying its own electric car prototype.

“Our vision is to be a component supplier for electric vehicle manufacturers,” Ken Chang, an LG vice president, said at a GM event in suburban Detroit.

Mr. Reuss said LG’s work on the vehicle enabled the company to produce the vehicle more quickly and with a better range and at a lower cost than might have been possible without the close partnership. He added he wasn’t sure whether GM would replicate this model again.

LG already produced the battery for the Chevrolet Volt, a plug-in hybrid electric car. GM has delayed the nationwide launch of the 2016 version of the vehicle, but will begin selling it in California this year. With a new battery, the 2016 Volt’s range increases to 53 miles, up from 38 miles on the 2015 model.

Write to Mike Ramsey at michael.ramsey@wsj.com and Gautham Nagesh at gautham.nagesh@wsj.com