JACKSONVILLE, Fla. – The owner of a Westside auto repair shop was arrested on drug charges Wednesday, according to the Jacksonville Sheriff’s Office.

Police said illegal narcotics were being sold out of Jack’s Auto Services on Cassat Avenue at San Juan Avenue.

Police raided the car wash and detailing business and found narcotics, money and weapons inside. It’s unclear if the guns were legally registered or what type of drugs were seized. Police also removed dozens of bottles of alcohol from the business.

Multiple people were in handcuffs Wednesday afternoon, but police said for now the only person who has been arrested is the owner. His name or the charges against him were not released at the scene. 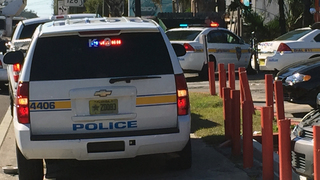 People who live in the area said the business has been at the location for about a year.

A business owner in the area said the auto shop didn’t seem to be doing much business, but the owner was still paying rent, which isn’t cheap.

“It appeared they were doing well,” said an employee of the lawn mowing business next door. “It’s just sad to see they aren’t doing as well as we thought they were, I’m hoping that things get worked out and someone will get back into that building, if not them.”

There was no answer Wednesday evening at the home of the listed owner of Jack’s Auto Services.