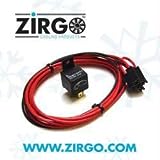 At a price to earnings ratio of 5.3 compared to an average PE of 8.4 for a group of automakers that includes Toyota (TM), Daimler (DAI), BMW (BMW), and Ford (F), General Motors (GM) is undervalued by at least 30%. Since all companies share the similar threats of peak auto-sales, it becomes clear that the market is uniquely valuing General Motors based on its history, not on the capital-intensive industry it operates in.

In the last three years before things started to go south in the economy in late 2007, the automotive segment of General Motors burned $16 billion in cash (cash generated from operating activities minus capex). Also, in those three years (2006,2005,2004), GM Automotive lost $11.9 billion in net income.

That can be due to two factors; capacity utilization and interest expense.

I think most of this divergence can be contributed to the previous corporate culture that was taking place in GM in 2006 and the years preceding. At that time, GM was the biggest auto manufacturer in the world, so it became obsessed with maintaining the status quo on the expense of losing money. The company built plants more that it needed, which increased costs and debt. For instance, buildings and land improvement were worth $18.5 billion in 2006 (page 145, 2006 annual report) whereas that number declined to just $6.6 billion in 2016 (page 62, 2016 annual report). Also, machinery and equipment assets were worth $51 billion in 2006, whereas that number declined to $22.8 billion in 2016. This huge decline in assets resulted in just 33% decline in vehicles produced (9.1 million worldwide units in 2006 vs. 6.2 million in 2016). So, it’s clear how GM managed to be more efficient after the crisis.

And it’s not just General Motors, the whole US auto manufacturing industry is in better shape compared to 2006.

GM in 2006 was a disaster. As I said earlier, it was obsessed with growth. The number of GM dealerships in North America was 8,000. However, that number declined to just 4,800 in 2016, a 40% decline. While dealerships are independent businesses, an auto manufacturer incur implicit costs when dealing with so many dealerships. Beside needing a higher number of supporting staff and higher distribution costs, having so many dealerships damage the value of the brand. A huge number of dealerships increases the competition between them, which pushes them to make excessive marketing campaigns, which may devalue the brand image. They can also engage in selling tactics that disturb customers and decrease brand loyalty for GM products.

Fortunately, GM figured that out, and it reduced its number of dealerships by 40% in a 10-year period.

After its bankruptcy, GM made a deal with United Auto Workers (UAW) to transfer all the underfunded amount of the pension obligations to the new GM entity. Following the closing of the restructuring program, GM started a plan to reduce its pension obligations. In 2012, it paid a lump-sum payment for 42,000 workers instead of giving them a monthly payment. Also, GM transferred the pension liabilities and assets of 76,000 workers to Prudential Insurance, a subsidiary of Prudential Financial (PRU), in return of paying PRU $3.5 billion to $4.5 billion.

Accompanied by having a positive cash flow and paying its obligations from its cash-from-operations, GM decreased its benefit obligations from $85 billion to $68 billion (it’s worthwhile to mention that interest rates were at the top in 2006, which deflates the obligations, the opposite of how things were in 2016).

Mistakes made by management

One of these decisions is related to selling the company’s majority stake in GMAC, now known as Ally Financial (ALLY). In 2006, GM sold 51% of GMAC to an investor group for $14 billion, half paid in 2006 and the other half over the following three years.

Besides being the most profitable unit for GM and a cash cow, GMAC was one of the main providers of auto loans to consumers. When GM sold the controlling stake in GMAC, GM couldn’t control GMAC’s operations. During the 2008 crisis, the company (GMAC), decided to give loans only for prime borrowers with 700 FICO score and above, preventing subprime borrowers from getting loans from the company. This move made things worse for GM as nearly 25% of potential buyers couldn’t get loans to buy GM vehicles (GM auto sales fell 11% in 2007 and 33% in 2008).

Another wrong decision made by management is regarding rebates and auto loans. Following the 2001 terrorist attacks, GM decided to refresh demand by offering attractive incentives. Not only did GM offered 0% loans, the company gave $3,000 in rebates to buyers (rebates kept increasing till $6000 and sometimes reaching $8000). These practices pushed GM to remain stuck in these practices for years, which resulted in losing billions. It’s worth to note that while GM is now giving 0% rate loans, interest rates in early 2000s were much higher than today (10-year treasury rates in 2000-2005 were between 4% and 6%, much higher than today’s 2.2% rate).

All these mistakes contributed to GM’s failure in 2009. Current GM management is much more disciplined and focused. Management’s goal is not to be the biggest auto manufacturer in world, it’s to be the most efficient and profitable. And that’s can be seen in the huge difference in GM’s profitability between 2000-2008 and 2010-2016.

It’s foolish for any investor to think that the current GM is the same as the old one. The company made substantial improvements in its balance sheet, cash and cash equivalents is now $35.6 billion whereas that number was $31 billion in 2006 (GM sold many assets, while debt stayed the same, to increase cash in 2006 whereas most of current liquidity is from operations). Also, buying a stake in GM today gives investors a residual claim as stockholder’s equity is $43.8 billion, unlike in 2006 where stockholder’s equity was a negative $5.4 billion. The new GM is much more efficient with 40% less dealerships, 23% less employees, and a 50% reduction in the gap between value of pension assets and liabilities. Not to forget, the new GM has a gross margin of 11%, a 57% efficiency increase from 2006 levels of 7%.

We believe that the pessimism regarding General Motors is psychological and not based on true fundamentals. As a long-term investment, we rate GM as a buy.