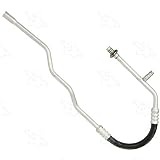 You gotta love Toyota, shamelessly pitching yet another restyled carryover vehicle as “all new.”

OK, the 2014 Highlander crossover SUV isn’t entirely carried over from 2013. But you can make a strong case that most of the changes either are unimpressive, or are a step backward.

Remarkably, though, the overall package amounts to the best Highlander ever. And, except for one obvious example, it’s unclear how Toyota worked that magic.

The 2014’s base engine loses a couple of horsepower. The third-row seat is further marginalized for more cargo space behind it and a little more front legroom. The 2014 models gain 100 to 200 pounds vs. the 2013.

But fuel economy rises slightly on the optional V-6 engine, due largely to a big, laudable change: A six-speed automatic transmission replaces the 2013’s five-speed. That is, indeed, all-new and worth the description. And in addition to eking out a bit more mileage, it makes Highlander much nicer to drive.

Chassis specifications pretty much match the 2013’s. But in what would appear to be backsliding, the front and rear stabilizer bars are thinner. That typically makes a car feel sloppier in turns and have more body lean. Not so in this case.

So, same engines, same platform, about the same overall size, same chassis dimensions and nearly the same chassis hardware — in our lexicon that eliminates any legitimate claim to the “all new” description.

Toyota cares not. It did the same on the 2012 Camry. In fact, it went even further and said it “reinvented” Camry.

The latest Highlander is among the most-pleasant all-around vehicles in years — an excellent blend of ride comfort, handling agility for a family rig, performance and interior space.

It suffuses you with mild pleasure and enjoyable anticipation as you stumble to it after a hard day in the salt mine. Not a full-bore grin-mobile, but endearingly, unfailingly satisfying.

The styling updates didn’t thrill us, but they weren’t ugly, either.

The redone interior is a nice place to spend time, but switches are scattered. The test Highlander, an XLE with all-wheel drive (AWD), was optioned to $39,302, but still had plastic plugs in some unused switch openings, silently scorning you for not spending even more for every feature.

The second row of seats slides very far forward or back. With it forward, you can accommodate actual humans in the the third row (barely) or expand cargo space with the third row folded. With it back, you can give second-row riders generous legroom at the expense of the third row.

One issue: When the second row’s far back, the seat tracks on the floor are exposed. We expect they’ll wind up ripping a cuff or scraping an ankle.

In the dashboard/console area, Toyota thoughtfully provides a power-cord pass-through that allows the cord to run from the plug near the gearshift lever up to a shelf meant to hold phones and the like. Minimizes cord tangle and leaves the cup holders available for actual cups instead of being wrong-shaped phone holders.

Touch-sensitive buttons were not our favorite feature. Such controls are all the rage, but they lack the feedback you get from a push-button, and they aren’t sensitive enough to instantly activate the features they control.

And we fervently object to Toyota considering the navigation system just another application, and requiring you to hit the “app” button then choose navi. Sorry; navi’s a thing of its own, above and beyond mere “apps.”

Outside, we’d have skipped the $599 running boards, which, on almost any vehicle except a tall-riding truck, serve only to transfer road muck onto your leg.

Highlander, derived from Camry’s underpinnings, was among the chief pioneers in the midsize crossover SUV market, starting with the initial 2001 Highlander. Toyota understood buyers were headed away from big SUVs into smaller, car-based crossovers.

So raise a glass to the automaker’s insight. And give a second salute to the surprisingly appealing way Toyota has executed the latest Highlander.

ABOUT THE 2014 TOYOTA HIGHLANDER

When? On sale since January.

Where made? Princeton, Ind.