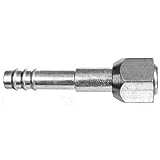 The first Cobra sports car built by Texas racing legend Carroll Shelby sold over the weekend for a record $12.5 million at the RM Sotheby’s Auction in Monterey, Calif.

It was the most ever paid for an American-made car, and proceeds from the sale will go to the Shelby Trust.

Aaron Shelby, the 44-year-old grandson of Shelby and a board member of Shelby International, drove the Miata-sized Cobra across the block at the auction.

Shelby built the car in 1962 after persuading A.C. Cars of Britain to provide him with one of its lightweight sports-car bodies and chassis, to which he added a 260-cubic-inch V-8 from Ford.

The Cobra was meant to be a raw, high-performance sports and track car and Shelby — who had retired from racing by then and was trying to start a business — convinced Ford that it could beat rival GM’s Corvette.

CSX 2000, as the car was called, led to thousands of additional Cobras and high-performance Mustangs from Shelby American, which is still in business today.

Once the car was completed, Shelby promoted it heavily to car magazines like Road and Track, Car and Driver and others.

A sly master marketer, Shelby wanted the magazines to believe that he already had a small supply of the cars and repainted CSX 2000 several times so a different-appearing car would be on the cover of various magazines.

Shelby owned CSX 2000 since it was built, and the unrestored car reflected its 55 years of age. Its paint was chipped and slightly faded, and its black bucket seats were torn.

But it also was one of one.

Look for our story Sunday on Aaron Shelby, who is becoming increasingly active in Shelby International — the holding company for Shelby’s businesses — and in the automotive world in general.