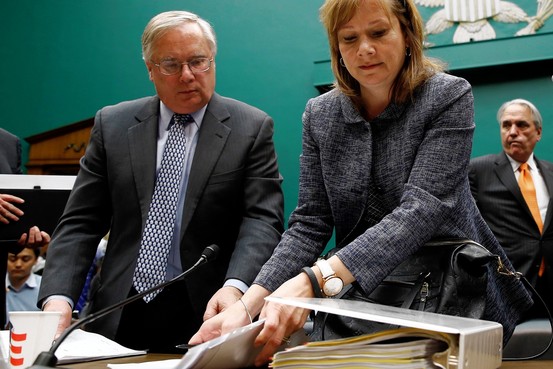 Michael Millikin and GM CEO Mary Barra in April. Both are to appear before a Senate panel Thursday.
Reuters

on why senior executives weren’t aware of defective cars turn their sights on Thursday to the auto maker’s top lawyer whose staff signed off on wrongful-death payouts that pointed to the fatal flaw.

a 37-year company veteran, has come under deeper scrutiny in recent months as the recall ballooned into a financial and public-relations nightmare. He has said underlings kept him in the dark about settlements that cost the auto maker millions of dollars and exposed the safety defects.

On Thursday, he is expected to publicly testify under oath for the first time on what he knew about multimillion-dollar settlements dating to 2007 that involved deaths in cars in which the air bags failed to deploy. Among those settlements were to the family of a 29-year-old Georgia nurse whose lawyer proved the company had redesigned the switch without acknowledging it.

The auto maker has linked 13 deaths to faulty ignition switches that could suddenly turn off, disabling air bags and impeding brakes and steering in small cars including the Chevrolet Cobalt and Saturn Ion. Plaintiffs lawyers say the number is much higher. The Justice Department has launched a criminal investigation and the Securities and Exchange Commission also is probing the matter.

Mr. Millikin won’t be the only new face to appear before the panel.

PLC, the manufacturer of the defective ignition switch that was installed in 2.6 million cars GM recalled in February, also is expected to testify under oath. GM Chief Executive

will appear for a second time.

“Delphi made the part, and I want to get their story,” Sen.

(R., Nev.) said. “Delphi requested changes in the part and they believe that they were ignored. I think you don’t complete the GM story without hearing Delphi’s part of it.”

Mr. Millikin, however, likely will be center stage.

“There is a reason Michael Millikin will be testifying,” a spokesman for Sen.

(D., Mo.), the hearing’s chairwoman, said. “The senator will be posing some tough questions that haven’t yet been answered about the role GM’s legal department played in delaying this recall.”

Mr. Millikin hasn’t testified at three earlier congressional hearings. In previous rounds of questioning, Ms. Barra and the culture of GM’s engineering operations were the focus of attention, but lawmakers have signaled an appetite to widen the probe to cover legal staff, Delphi and other matters.

The latest round of congressional scrutiny comes more than a month after a report by former U.S. prosecutor

who was commissioned by GM management, found in-house lawyers working under Mr. Millikin were aware of evidence that pointed to the ignition switch as the cause of the air bag failures 10 months before the auto maker launched its first recall. Mr. Millikin, according to the report, told GM he wasn’t fully aware until January of the ignition-switch problem or the settlements that his subordinates had approved.

The Valukas report concluded Mr. Millikin was left in the dark because of the way GM handled settlements. Its lawyers typically didn’t require higher level approvals unless the settlements reached a $5 million threshold, the report said.

Plaintiff lawyers in some of those cases are now seeking to reopen settlements, charging GM improperly concealed knowledge. GM has hired compensation expert

to manage payment of claims and possibly renegotiate previous settlements.

“I intend to ask why these settlements are being kept secret and [demand] GM make them public,” said Sen.

Messrs. Feinberg and Valukas also are expected to be the witness list for Thursday’s Senate hearing.

Ms. Barra dismissed 15 employees in June in connection with the ignition-switch issue, including lawyers who reported to Mr. Millikin. She hasn’t addressed whether Mr. Millikin was disciplined.

Meanwhile, congressional investigators are still digging into what GM and Delphi officials knew about problems with the ignition switches during the decade before GM’s first recall of the cars earlier this year.

Documents released by a House panel raise new questions about a conclusion in the auto maker’s internal investigation that a switch engineer,

authorized design changes for the part used in Cobalts, Ions and other compact cars, and concealed the changes from others at GM.

“They would have us believe that no one in the company’s executive ranks knew of the faulty ignition-switch problems although there are emails after emails showing Mr. DeGiorgio talking with other engineers and suppliers,” Mr. Blumenthal said. “I am very interested in the report’s gaps and black holes as far as when it comes to upper level management. The report stops short of going higher on who knew what and when.”

A June 2, 2006, email disclosed by House investigators shows an engineer at Delphi copied 30 people at GM and Delphi on a description of changes to the ignition switch. The document is one of several marked with a stamp stating that it was also provided in response to a Justice Department subpoena.

The email and its attachments describe changes to a printed circuit board and note a critical mechanical change, indicating a relatively wide circle of staffers were aware of the situation.

However, GM product safety investigators assigned to figure out why Cobalt air bags weren’t deploying failed to discover records of the design change. Mr. DeGiorgio failed to inform them when they asked about changing the switch design to prevent unintended shut-offs, the GM internal investigation found.

The Valukas report concluded: “Had others at GM known that the ignition switch had been changed during MY 2007, it is highly like they would have concluded their investigation much more swiftly and recalled the Cobalt and other cars earlier.”

Mr. Valukas’s report acknowledges in a footnote that other GM employees did know about changes to the ignition switches used in the recalled cars. Among those alerted to the change were engineers on a team assembled to address complaints that Saturn Ions wouldn’t start.

Mr. Valukas, at a prior hearing, testified Mr. DeGiorgio didn’t follow proper protocol and repeatedly failed to alert safety investigators to mechanical changes when they questioned him about the switch.

—Christina Rogers contributed to this article.

Write to Jeff Bennett at jeff.bennett@wsj.com, Joseph B. White at joseph.white@wsj.com and Siobhan Hughes at siobhan.hughes@wsj.com