The major auto manufacturers have lagged the market for the last two years. The result of this is that on many metrics like PE ratio, Price to Book, or Price to CF, the car makers look like an interesting investment opportunity. One of the reasons for the recent underperformance is that almost all of the manufacturers have been impacted by recalls. In fact, in recent years, the number of recalls (blue bars) and the total number of potentially impacted vehicles (red line) has been record breaking as seen in the image below: 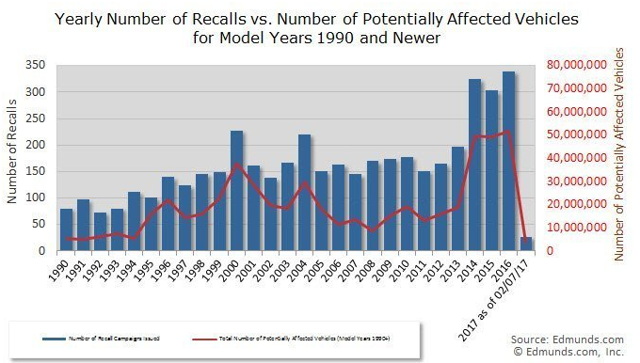 The entire industry has suffered from quality issues and a very competitive landscape with new regulatory hurdles. However, these setbacks are what provide investors an opportunity to buy Toyota Motor Corporation (NYSE:TM) at a fair price. The company currently offers a 3.10% dividend yield with a comfortable payout ratio of 41% while trading near the lower end of its historical PE multiple range.

Part of the reason this article is recommending Toyota is based on valuation. Other more qualitative reasons will be discussed in the section that follows. Here are some of the basic financial metrics and ratios for Toyota and two other major manufacturers, General Motors (NYSE:GM) and Ford (NYSE:F). 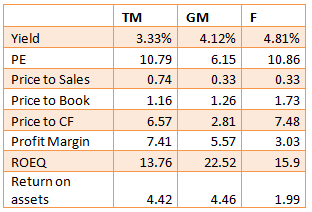 At first glance, there are many similarities among the three companies. All currently pay an attractive dividend, have low PE ratios compared to the S&P 500, and have strong return on equity numbers. One may wonder why this article is focusing on the company with the lowest return on equity in the table. This is where we get to one of the key differences among the car makers. Companies have two main options to finance their operations: Issuing shares (equity) and/or taking on more debt. Auto manufacturing is a very capital intensive business, and as we will see below, some companies rely more on debt than others.

From the table above, the Long Term Debt to Equity numbers for General Motors and Ford are over double that of Toyota Motor Corporation. This difference helps explain why Ford and GM have higher ROEQ numbers but lower profit margins than their Japanese competitor. Of course, it’s not that long ago that the risks associated with high debt were made clear with GM’s 2009 Chapter 11 bankruptcy. Another simple way to compare the financial strength of these three companies is to look at their current Asset to Liability Ratio. The Asset to Liability Ratios for Toyota, GM, and Ford currently stand at 1.56, 1.25, and 1.15, respectively.

Considering cash from continuing operations, purchase of property and equipment, and dividends paid, all three of these companies have been generating excess cash in the last four years. Annual numbers from the last four fiscal years were used in the tables below with the most recent appearing on the left:

Another way to determine if Toyota Motor Corp. is reasonably priced is from a simple present value calculation considering a 10-year time horizon as shown in the table that follows: 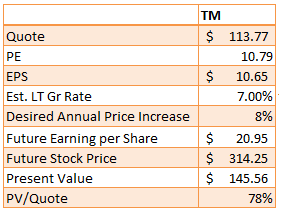 One of the main risks facing Toyota Motors is the potential for protectionist government policies such as a US border tax. North America accounts for the biggest slice of sales as seen in the table from Toyota’s Q3 presentation:

While changes in trade relations between countries could negatively impact all car makers, one of the areas we think Toyota comes out ahead is in research and development. In the automotive industry, as with most other industries, if you are not adapting, innovating, and looking ahead, you will be left behind. Toyota is an innovation leader. For example, in 2000, Toyota released the first hybrid four-door sedan available in the United States, the Toyota Prius. While hybrids still account for only a small portion of overall car sales in the US, the chart below shows Toyota’s dominance in this area:

U.S. hybrid car sales in May 2016 by manufacturer 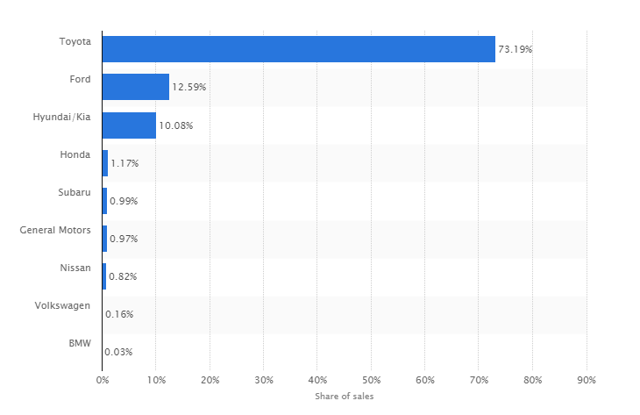 Toyota has not entered the electric vehicle market to the same extent as some other manufacturers. The reason for this is that it believes it can currently provide a better value proposition to customers with hybrids while also heavily researching other alternatives such as hydrogen fuel cell vehicles (FCVs). Toyota Motor Corporation believes that its research and development initiatives provide it with a strategic advantage. Let’s see how the R&D budgets of Toyota, GM, and Ford compare to each other. The table below shows the R&D spending for the three companies for the last three fiscal years with the most recent appearing at the top. The bottom row shows the average R&D spending for the past three years.

We think the greater R&D spending by Toyota will lead to it getting and staying ahead of most of its competitors from an innovation standpoint. Per Toyota’s 2016 Annual Report, its R&D focus is on environmentally friendly vehicle technologies, energy efficient and vehicle safety information technology. Specifically, it is looking at improving hybrid technologies, gasoline engine fuel economy, fuel economy of clean diesel engines, and development of electric vehicles, fuel cell vehicles, and other alternative fuel vehicles. While gas is cheap now, making hybrids less attractive from a pure price comparison standpoint, this is not permanent.

The automakers are looking like an interesting investment opportunity from an intrinsic value perspective. The sector looks cheap relative to the overall bubbly market which currently trades at a historically high PE ratio of 26.57. There has been a negative sentiment towards the sector partly due to the competitive environment and high recall volumes as discussed above. These recalls have had a significant impact on the financial performance of many of the major manufacturers including Toyota. This negative sentiment currently provides investors with a good time to initiate a position in the biggest auto manufacturer by market cap. Since this article did not cover specific models or product lines, we should at least mention that Toyota not only competes based on quality and price in the mid- to low-price categories, but also on the high end with Lexus. If you are looking at this sector, consider an innovative and efficient company that also has greater financial stability than many of its peers.

Disclosure: I am/we are long TM.