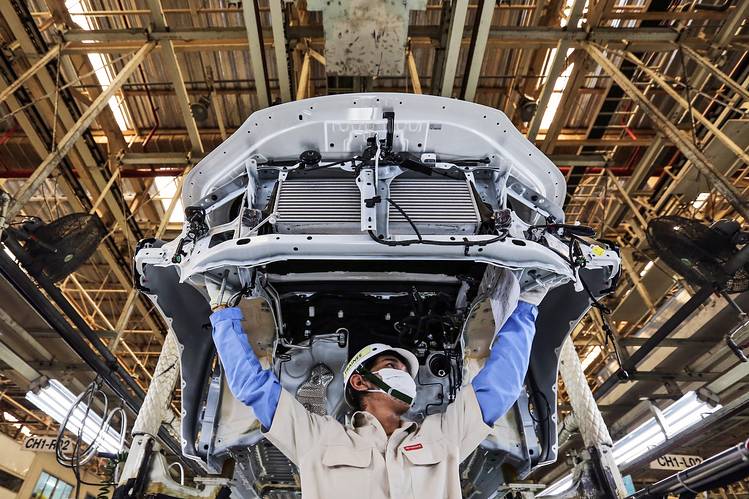 
is preparing to reorganize the company around product classes in a shift from a regional orientation after topping global sales of more than 10 million vehicles in each of the past two years.

Toyota will outline the changes before its fiscal year ends in March. The plan, said people familiar with the situation, is to make the car maker more nimble in the face of challenges due to its sheer size.

President Akio Toyoda wants to reorganize the company into units focused on vehicle size and type, according to one of the people familiar with the matter. One unit might be in charge of Toyota’s compact-car business, while another might handle sedans. Other units could focus on commercial vehicles or additional business segments.


and Toyota—and each has stumbled technically or financially in the aftermath.

In 2009, as Toyota approached the mark, it was hit with complaints of unintended acceleration that led to millions of recalls and a $1.2 billion settlement of a U.S. criminal investigation. GM, the prior global sales leader, recalled millions of vehicles in 2014 over faulty ignition switches linked to more than 120 deaths. Then came Volkswagen, which reached 10 million in world-wide sales in 2014, and now is grappling with recalls, lawsuits and fines after it admitted to manipulating diesel-emissions tests. 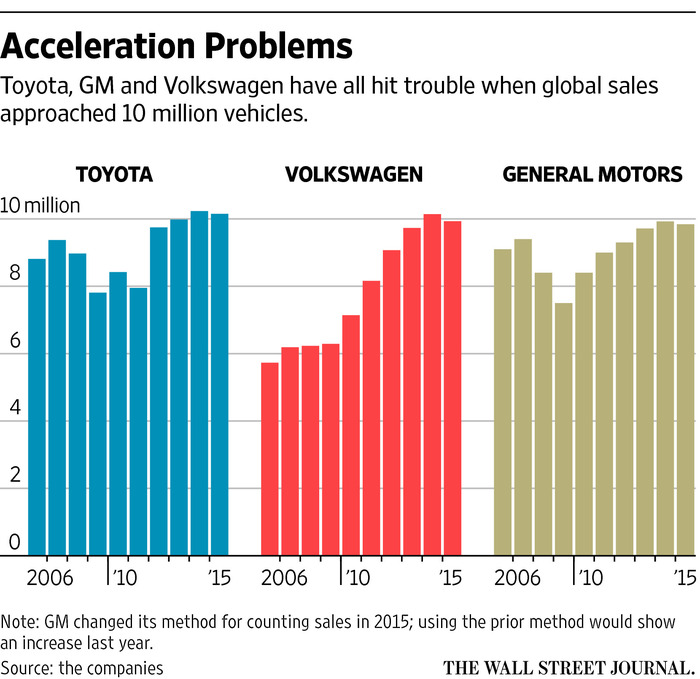 “Bigger was better in the past, and that’s why we were all expanding,” one senior executive at Toyota said. “But at this scale, we’ve come to a point that being too big is perhaps not a good thing.”

Toyota’s move would be a shift from a region-focused structure Mr. Toyoda put in place three years ago. Currently, one unit handles developed markets, a second deals with emerging markets, and a third oversees important components such as engines and transmissions. The fourth contains Toyota’s Lexus luxury division. It wasn’t immediately clear whether the new structure would supplant the existing management structure or coexist with it.

While the frequent changes have caused some confusion among employees, they have helped Toyota act more quickly than it would have in the past, people familiar with Toyota’s executive-level decision-making say.

Satoshi Nagashima, a managing partner with consulting firm Roland Berger Strategy Consultants, said Toyota’s changes over the years have allowed the auto maker to act more swiftly in recent years. “What matters now is how effectively the managers could run any new structures that come in place,” he said.

One of the people familiar with the situation said Mr. Toyoda intends to name relatively young members of his senior executive team to head each unit. The goal is to speed up decision-making and groom a new generation of leaders, the person said.

Mr. Toyoda, who took over as president in 2009, believes he has passed his halfway mark at the helm, one person said.

Toyota has come a long way since Mr. Toyoda took over seven years ago, shortly after the company posted its first annual loss in decades due to the global financial crisis. It has since overcome a series of crises including recalls, the effects of the 2011 earthquake and tsunami disaster in Japan and floods in Thailand. Its share price has roughly doubled in seven years. and this year the auto maker is expecting a third straight year of record profit. 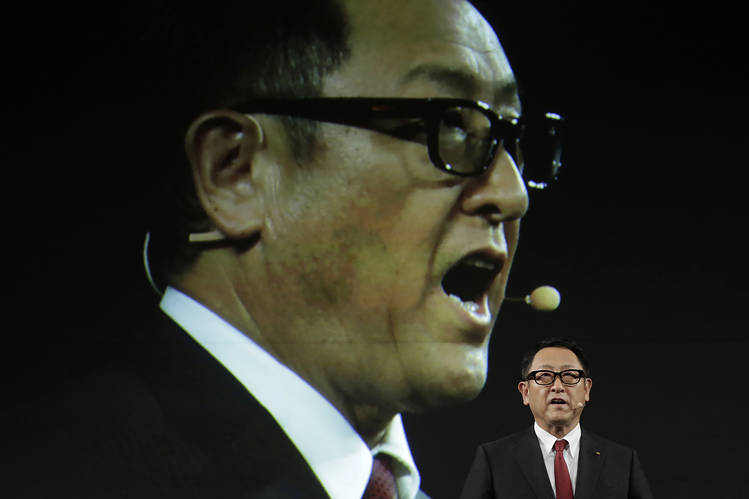 Despite changes it made following the recall crisis, Toyota remains sluggish and hierarchical in some of its decision-making, current and former executives say.

Shifts in the auto market have blurred lines between developed and emerging countries, posing challenges to the company’s existing structure, one person familiar with the situation said.

Emissions and safety standards, once looser in emerging markets, are tightening in most countries. Consumer tastes are converging, too. Yet Toyota still develops and produces many models aimed at specific markets.

For example, it offers the Vitz compact in Japan and a sister model Yaris in Europe; the Aqua hybrid, also known as the Prius c in Japan and the U.S., and the Etios compact car for India. Developing a global compact model for various markets could help boost efficiency, one person said.

Toyota’s rivals also are wrestling with the shifts in the industry. At GM, Chief Executive Mary Barra has vowed to overhaul product development and the legal department to improve communication on quality problems. GM has tried to clarify lines of authority in deciding on recalls.

At Volkswagen, Chief Executive Matthias Müller has replaced more than a dozen senior executives and eliminated three positions on the management board.

At Toyota, the looming reorganization is the latest in a series under Mr. Toyoda. In 2011, he shrank the board to 11 members from 27. Last year Mr. Toyoda gave more power to senior managers to run the units set up in 2013. He also named several foreigners to senior posts, in a move to dismantle a pyramid structure long dominated by Japanese executives.

Mr. Toyoda has said that for members of the 10-million club, such overhauls are inevitable if they want to continue growing.

“We are painfully feeling the gravity of our responsibility and what it means to sell 10 million vehicles a year,” he said in March 2015. “We can’t talk about our future growth unless we come up with new ways of doing our jobs.”

Corrections & Amplifications:
In the compact segment, Toyota Motor Corp. offers the Yaris model in Europe. An earlier version of this article incorrectly stated the name of the model as Auris. (Feb. 29)