$100.00
Home › Blog › US Automotive News › Toyota put on a race to find the most efficient drivers – Engadget

The Sonoma Raceway traditionally hosts Indy and Nascar events where cars sprint around the track at breathtaking speeds, burning thousands gallons of gas pulled from the remains of long-dead dinosaurs. The Toyota Prius Challenge is, in nearly every possible way, the exact opposite of that experience. 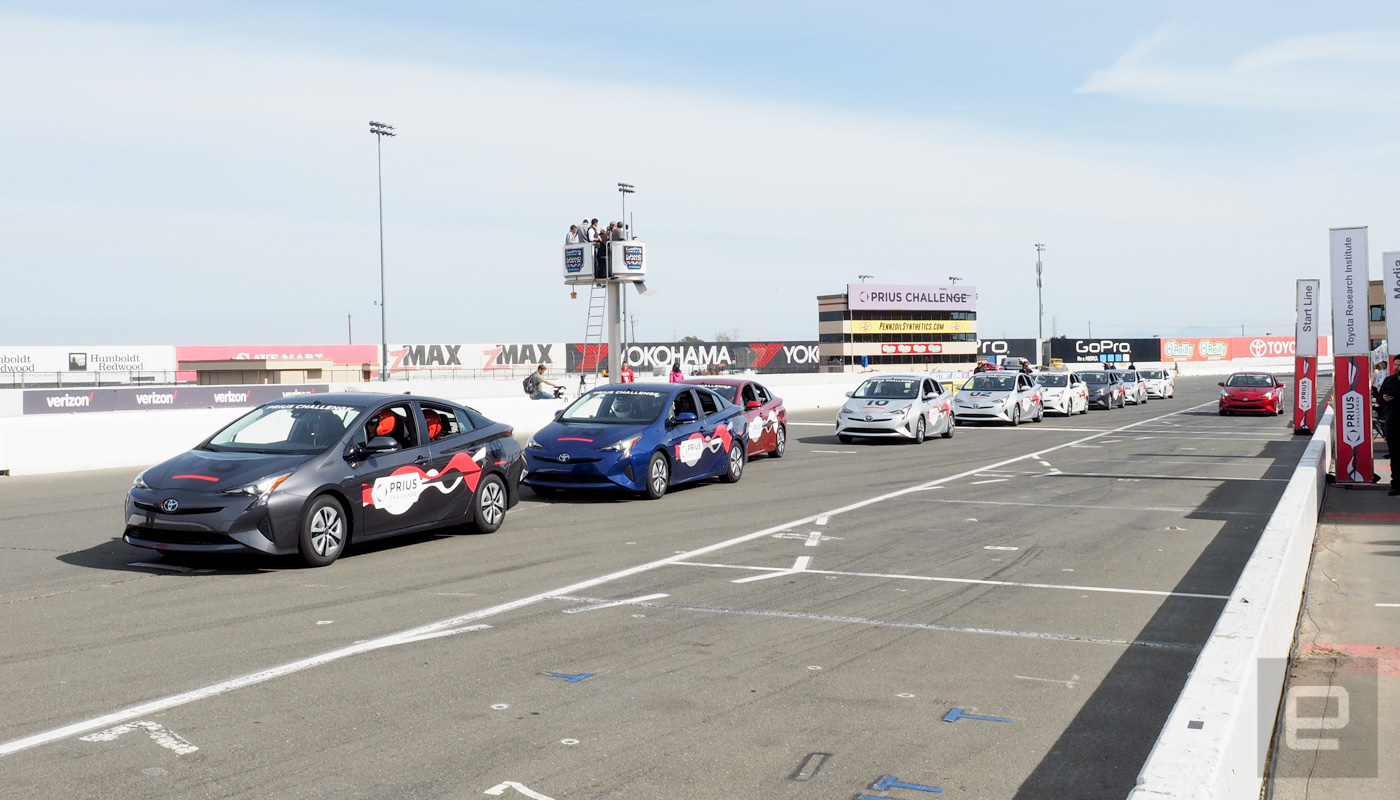 Instead of speed, competitors are graded on efficiency. Toyota picked 20 teams to drive around the track in identical Prius’ and tasked them with pulling as many miles per gallon as possible during a 40-minute, nine lap “race.” But the streamlining squads needed more than just a light foot.

Ahead of the competition, Toyota shared data with the teams to help them come up with gas-saving strategies. That information included details of the track’s turns and elevation changes. But, more importantly, the participants were provided details about multiple trips Toyota’s own team had made around the track so that the competitors could use to see how a Prius reacted to different driving styles. They might not have had a chance to actually drive on the track ahead of time, but for the most part they knew what it was like. I was lucky enough to sort of get in on the action. 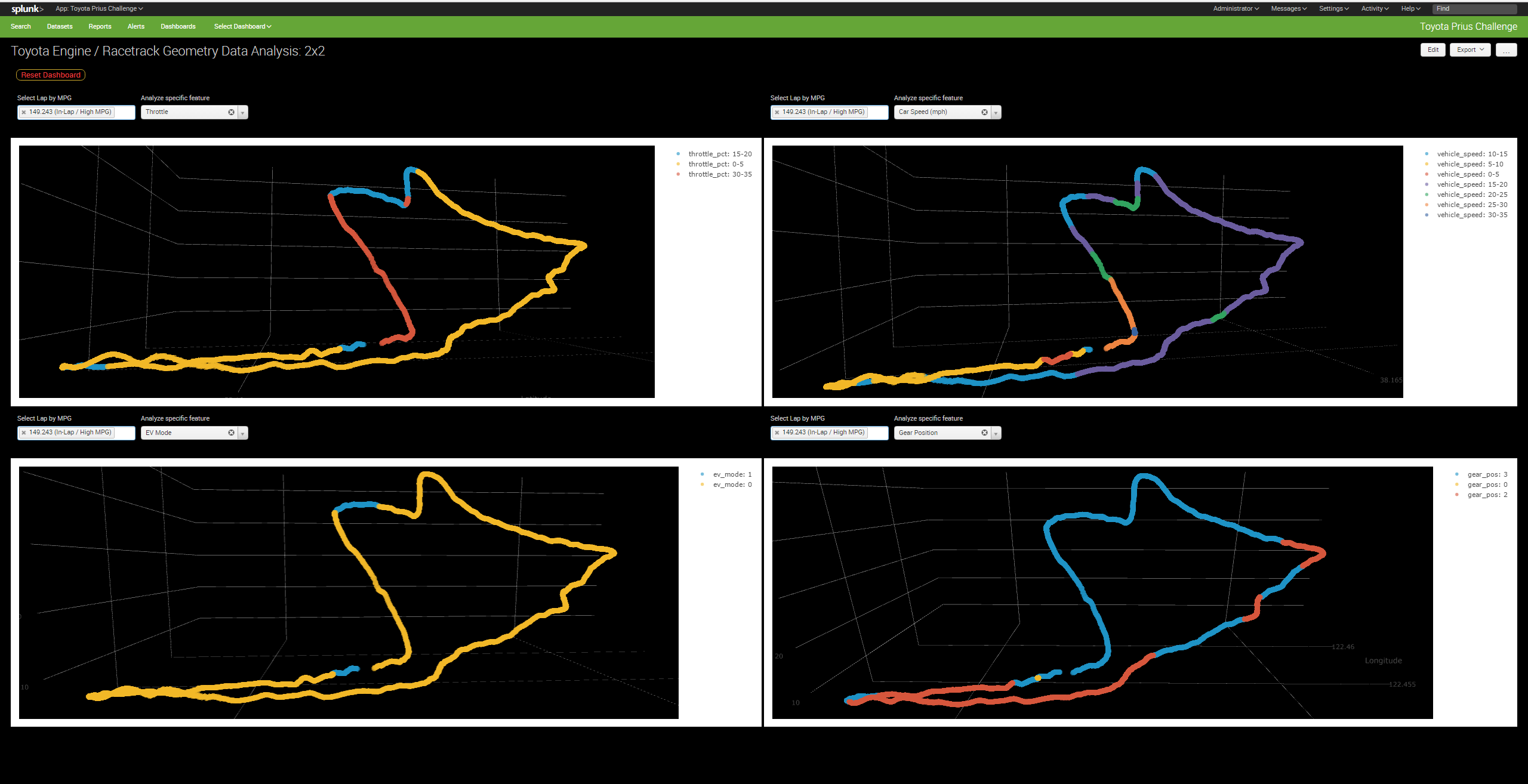 A week before the event, I was added to team Mile10. I would get the opportunity to be inside the car on race day and could help come up with a winning plan. With a few days to go before the race I joined mechanical engineer Michael Zhang and Gleb Esman, a senior product manager from data analytics company Splunk. We went over the fine details of data we were sent by Toyota.

It was at this point that I realized I wasn’t going to be of much help. Esman had mapped out the track along with information about the car’s performance at various points during a run. He showed us a slick 3D model that was sure yield maximum efficiency. Since we would have to complete our nine laps within 40 to 42 minutes and change drivers twice, timing seemed like the most difficult task. Then race day arrived and it wasn’t as simple as that. 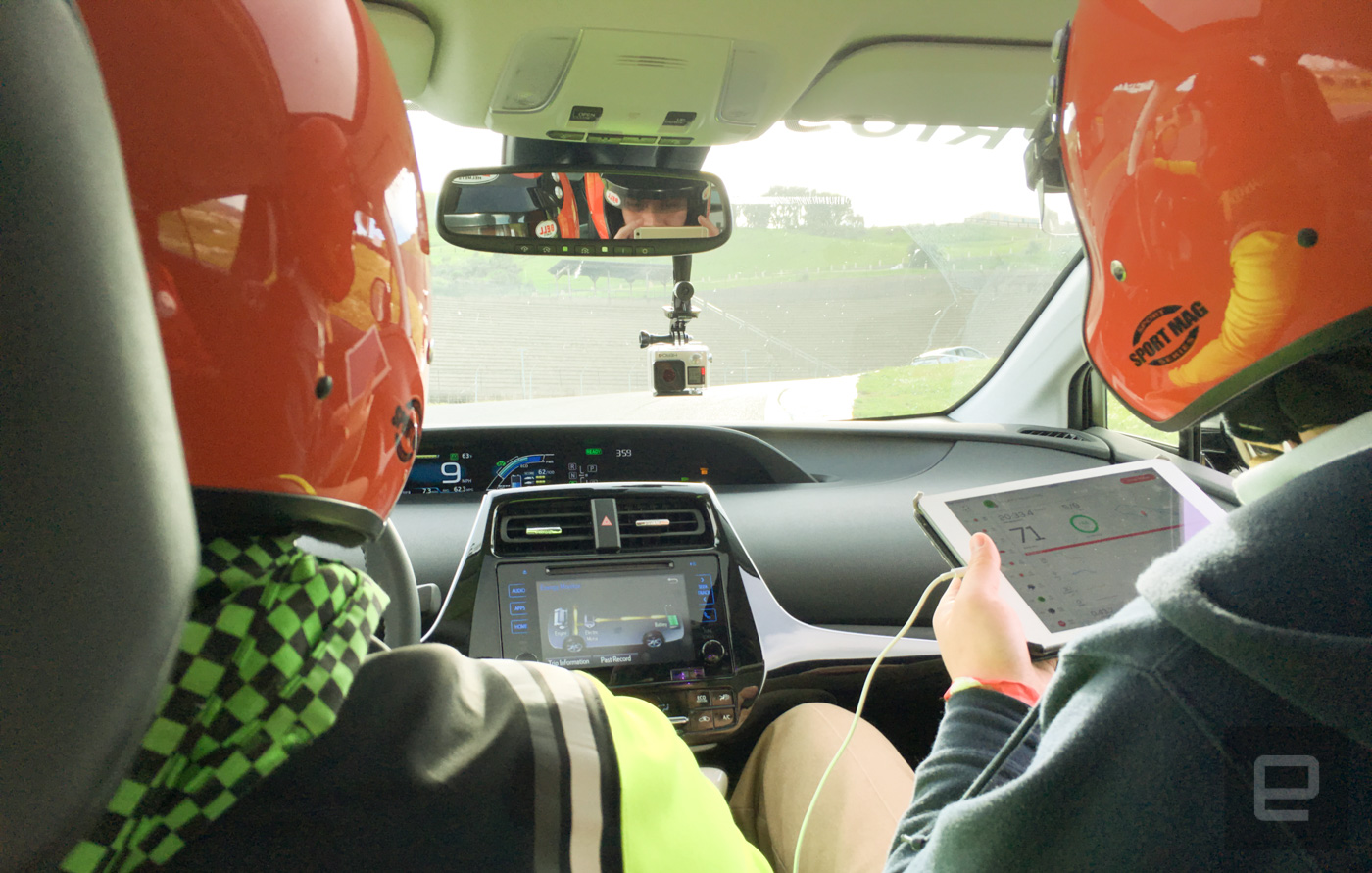 The teams were allowed practice runs to get a feel for the track. Engineers, analysts and developers used real-time data from their cars to see how well their pre-game strategy would play out. Turns out, not so great. For one thing, the teams didn’t take into account track traffic. You can’t just pass a car anywhere on the track if it’s in your way. Plus, actually driving is different from looking at data about driving.

“Initially we were planning on taking it as slow as possible,” said Javier Gonzales from team Phantom. “But that changed when we got here, because we realized we’re going to be racing with a lot of other cars. There’s a lot of dynamic changes that you have to account for and that really changed the way we planned our strategy.”

Data is is wonderful, but real-world implementation of it can be tricky especially when dealing with cars. Variations in temperature, asphalt, tires, wind and the last time the oil was changed, among other things, make car analysis tough. Toyota put on the event not only as a way for developers, researchers and engineers to get together but also, to find potential employees and partners that can tackle these problems. 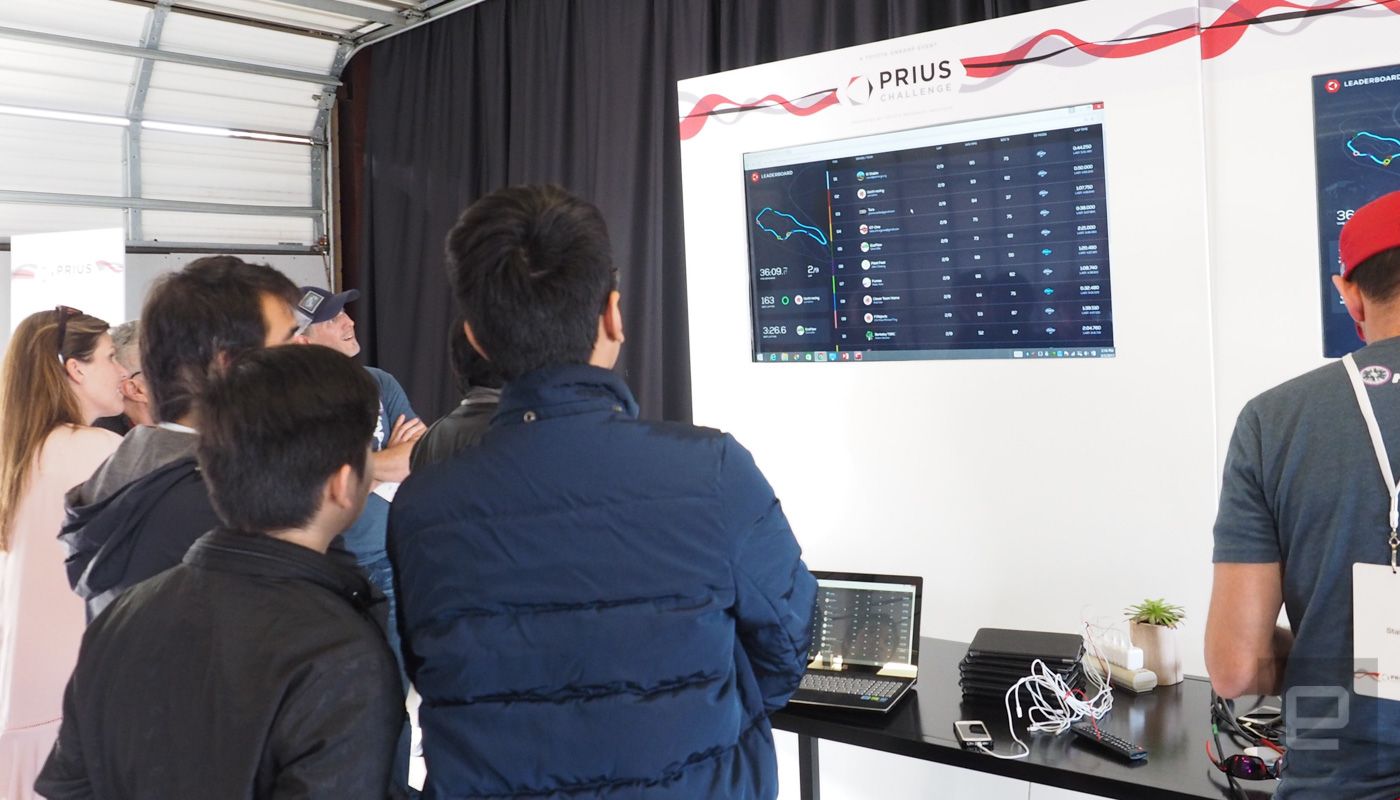 “We offer this this raw data footage of Prius vehicles we acquired during our test days and have it available for machine learning and data scientists,” said Masanori Yamato, corporate manager of Toyota Ventures. “That way we can find potential collaboration opportunities and potential hires as well.” So teams aren’t just competing for a trophy, then; they might end up working with or for Toyota in the future.

Meanwhile, back in the car, I had a blast even though I didn’t actually get to drive. While this an incredibly boring spectator sport (“oh, look a car doing 15 miles a hour down the straightaway!”), the in-vehicle action is exciting, in an intensely nerdy sort of way. I was tasked with making sure we didn’t creep up on traffic that would interfere with our strategy. 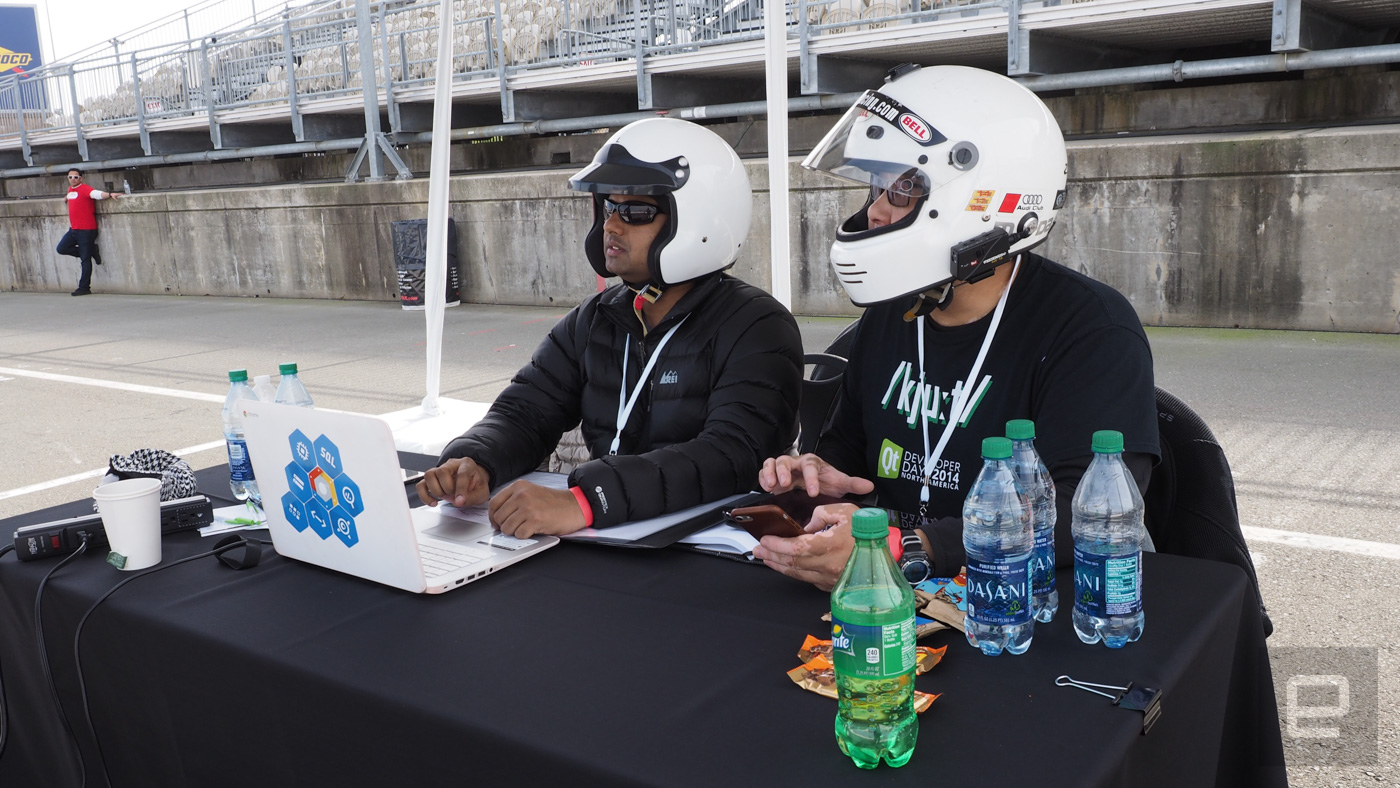 I think we did well, but nonetheless, our efforts weren’t enough to prevail. The winner was team EcoFlow with an average MPG of 85 miles per gallon. The team said that being flexible with their strategy helped them take the top spot. Like the other teams, their initial plans changed after the test laps. But they were able to bring it back via constant communication and combining data and the dynamics of driving on a track with other competitors. In the future, they won’t all be human.

Next year Toyota is adding an autonomous car to the competition. The teams will take on a robot that gets fed the same data. Yet even though the 2018 event will set the cars out on their own without traffic, there’s a good chance that humanity will emerge victorious because while data is important, once a car is on the road, it takes more than just computational power to end up in the winner’s circle.