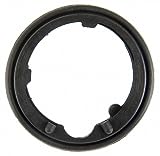 Befitting their work-oriented positioning, the Australian GXs ride on steel wheels wrapped in all-terrain tires, feature unpainted mirrors and door handles, and the chrome exterior trim is deleted in favor of black plastic. Their interiors are outfitted with vinyl flooring in place of carpet, hard-wearing cloth seats, simplified audio and climate controls, and durability-oriented plastics. Even details like the instrument cluster are plain and functional, not flashy.

But not all of the changes are de-contenting. Most notably, the GX includes as standard the aforementioned snorkel, useful in both high-water crossings and the dusty Outback. An auxiliary fuel tank adds nearly 12 gallons of capacity. In place of the 5.7-liter V8 fitted to American Cruisers, the Australian GX utilizes a 4.5-liter twin-turbo diesel V8.

The Land Cruiser has to be comfortable in Buckhead and capable in the Kalahari.

Other markets take things even further. A winch can be fitted behind the front bumper. Radios and side airbags can deleted for a true focus-on-the-basics approach. And, enthusiasts rejoice, a 5-speed manual transmission is available with the turbodiesel here and there. So, you can buy a new Land Cruiser with a stick shift, but you’ll have to take delivery in places that require immunizations and a visa to visit.

The UN knows that. Its operations generally don’t happen within sight of a Nordstrom. The organization wouldn’t comment on how it orders its Land Cruisers, but it is safe to speculate that many are outfitted with equipment beyond what Toyota specifies. Think armor plating and advanced communications equipment.

And then there are the ones that wind up in private hands as security patrol vehicles around mines in the Democratic Republic of the Congo, or as the only means of transportation to a remote oil field in the Arabian Peninsula.

The vehicle the United States calls “Land Cruiser” is generally known globally as the “Land Cruiser 200,” and it serves as the flagship for a range of Land Cruisers. Our Lexus GX 460 is the next step down, sold in most markets as the Toyota Land Cruiser Prado. From there, the lineup becomes increasingly utilitarian and specific to places like Africa, the Middle East and Australia, where models more clearly descendent from the original Land Cruiser (known here as the FJ40) are still sold as pickups and wagons.

Even if Toyota Motor Sales, the American arm of Toyota, offered the Land Cruiser GX, the company says there would be insufficient demand. In other words, it’s the off road equivalent of a brown, diesel, manually-shifted European wagon – a desirable unicorn for die-hard enthusiasts, but not really the general public.