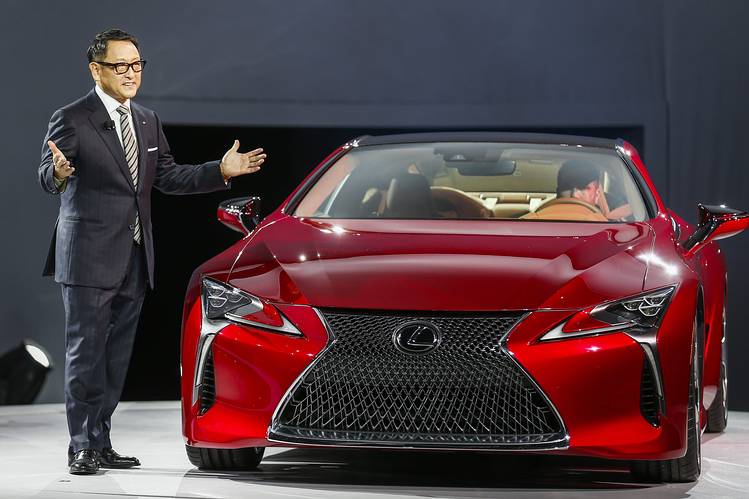 
has entrenched itself as the world’s top-selling car company, but its president says the Japanese auto giant still has work to do if it wants to consider its vehicle lineup as the industry’s best.

Akio Toyoda, in an interview at the North American International Auto Show, said, “Toyota still has many issues in terms of making better cars and becoming a better company.”

Mr. Toyoda became president of his family’s company in 2009, shortly before the company had to deal with sudden-acceleration problems that blossomed into a safety crisis. Last year, Mr. Toyoda lifted a three-year freeze on capacity expansions, authorizing new factories in China and Mexico.


, which it passed last decade in terms of global vehicle sales. It sells 10 million light vehicles a year, or about 11% of total industry volume.

In addition to being big, Toyota has a reputation for outperforming Detroit in the 1980s and 1990s in several important aspects of car making, including manufacturing, sales and quality. Many executives have used Toyota’s operating philosophy—built on continuous improvement and keeping things simple—as a blueprint for restructuring.

Ford’s former chief executive, Alan Mulally, often said his “One Ford” plan that helped save Ford from bankruptcy was shaped by his research of Toyota.

Mr. Toyoda is spearheading a campaign to beef up Lexus and funding a push into autonomous vehicles and fuel cells. During the interview, he repeatedly returned to the company’s mission of making cars that are “fun to drive.”

Having fun isn’t Mr. Toyoda’s only priority. The company recently announced a plan to all-but eliminate vehicles powered by gasoline and diesel engines by 2050. It will do that by moving to hybrids, fuel-cell cars and electric vehicles.

Regulation will play a role in the company’s ability to meet its ambition.

“We want to carefully determine the difference between what we can offer and what the authorities are asking for,” Mr. Toyoda said, adding that marketplace factors also play a role.

“Even if we could attain something, it’s difficult to understand the point if that becomes very unaffordable (for the consumers).”

“We don’t have an answer now, but we want to work with others to figure it out.”

While he played down the likelihood of acquisitions in the company’s future, Mr. Toyoda said the company remains open to partnerships.

“I think Toyota is a company that is the poorest in acquisitions. In the history of 70 or 80 years of Toyota there has never been any case of a successful acquisition,” he said. But “for the purpose of coming up with ever better cars … we will continue to have an open-door policy, willing to join hands with others.”