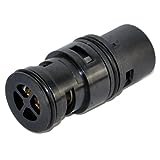 Ford’s Sync 3 has AppLink, a version of a shared software Ford is offering to the rest of the industry.(Photo: Ford Motor Co.)

Toyota is planning to be the first automaker to adopt smartphone software developed by Ford and offered to the industry at large in an effort to create a uniform way for car owners to use phone apps in their cars.

Ford created an open source software called SmartDeviceLink and branded a version for itself called AppLink to be used in Ford vehicles with a Sync infotainment system. The software platform provides consumers an easy way to access their favorite smartphone apps using voice commands and display them on the car’s touchscreen.

Ford is preparing to introduce a new version of AppLink this year that will add phone navigation apps as well.

The automaker is offering SmartDeviceLink for non-Ford vehicles, hoping if many automakers and suppliers adopt the technology, it will accelerate an industry standard that will increase the number of apps available for all to use, including Ford. And the apps will only improve if many companies are working on them and developers know their work will have wider appeal. “Ford is making the software available as opensource, because customers throughout the industry benefit if everybody speaks one language,” said Don Butler, Ford executive director, Connected Vehicle and Services. The announcement was made in conjunction with CES 2016, a huge electronics show underway this week in Las Vegas.

Currently it is difficult for a developer to create an app for use by many automakers who each have their own smartphone connectivity systems and require their own support. A developer may have to rewrite an app, for example, for use with Toyota’s Entune service.

While Toyota is planning to adopt the open-source software, Ford said Honda, Subaru, Mazda and PSA Peugeot Citroën are also considering it.

“Developing a safer and more secure in-car smartphone connectivity service – which better matches individual vehicle features – is exactly the value and advantage an automaker can offer customers,” said Shigeki Terashi, Toyota executive vice president. “We expect that many companies share our view and will participate in the industry SmartDeviceLink collaboration.”

Early adopters also include suppliers QNX Software Systems — which supplies the operating system for Ford’s Sync 3 — and UIEvolution. Both plan to adopt the technology and integrate it into their products.

The open source project is managed by Livio, a software integration company which Ford acquired in 2013. Livio builds the interfaces needed for each vehicle to use the software.

This first wave of adopters is a step towards giving consumers more choice in how they connect and control their smartphone apps on the road, Ford officials say. Developers have access to higher volumes of vehicles and new capabilities, consumers have more choice and the collaboration should improve the quality and security of the software.

AppLink is available on more than 5 million Ford vehicles globally and is expected to reach 28 million more vehicles by 2020 with plans to spread to new markets around the world.