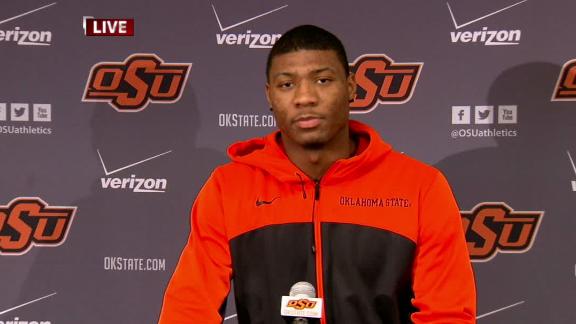 Where is Travis Ford?

Watch the video again of Marcus Smart shoving a fan at Texas Tech, but look at what happens after the actual shove.

While a minute-long video clip cannot possibly capture everything that was going on in the chaos, it certainly reflects the essence of what was and, more, what wasn’t happening. There’s Markel Brown and Phil Forte, escorting their simmering teammate the entire length of the court to the bench. Ford, the Oklahoma State head coach never rushes out to meet them, nor is he shown escorting his players away from a volatile situation.

A little later, there’s Smart, still by the bench, standing at his seat, jawing and screaming by himself. Travis Ford doesn’t tell him to sit down or, better yet, head to the locker room for the final seconds and cool off.

Ford shows up just once. He’s seen, hands on hips, trying to talk to an official amid the mayhem. Standing to his left is Smart, pointing and barking at the referee, an adult and authority figure, at the same time. Ford does nothing. Doesn’t point him to the bench, doesn’t silence him.

And that, aside from the actual shove, is the most telling part of this whole mess.

Ford has done nothing to help Marcus Smart this season. His failure to act is as much to blame for Smart’s meltdown as Smart’s own immaturity and lack of self-control. 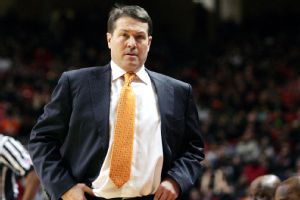 Given the opportunity during Sunday night’s news conference to either own up to his blame or at least admit Smart had issues that led to this mess and three-game suspension, issues that he could have addressed, Ford demurred.

Rather, he spoke about Smart, placing the totality of blame on his player’s already overburdened shoulders.

Ford insisted that he knows “Marcus Smart and knows his heart,” and this is not that person. The problem is, this is the Marcus Smart everyone else not only has come to know but also has seen. This was a horrific single act, but one borne out of behavior that had been brewing and festering for weeks.

Whatever rose-colored glasses Ford chose to wear didn’t color what everyone else saw — a kid falling apart and a coach doing nothing to help. Ford spoke repeatedly Sunday about the mistake Smart made, about what his sophomore in college has learned and how he will come back stronger and smarter from it (not to mention an NBA plug, which was a truly pathetic attempt to stoke Smart’s draft status during a news conference that had far more important implications to deal with).

“He made a serious mistake,” Ford said. “He’s proven to us many times what a great person he is, and we need to help him learn from this. Hopefully we will give him support, because I do truly think he’s learned a valuable person”

What’s missing is Ford saying what his mistake was, what he’s learned from it, what he will do going forward to help Smart (and whatever other players he coaches) to not trip over the same live wires.

When coaches latch onto the last microcosm of idealism in college sports, they argue that they are there to help players mature, to assist teenagers in becoming men. That’s why they occasionally yell, and frequently cuss; why, essentially, they make the big bucks.

Who has helped Marcus Smart mature and grow? What valuable lessons has he been given?

Absolutely no one and absolutely none. The day Smart decided to return to Oklahoma State for his sophomore season, he was given the keys to the Cowboys’ program, even if he really isn’t old enough to drive it.

What we’ve seen since is Exhibits A through Z in selling your moral soul in an effort to win basketball games. Smart is Colonel Jessep. Ford needs him on his wall to win, and don’t think Smart isn’t smart enough to know it. On Jan. 25, Smart went 1-for-7 against West Virginia and took out his frustration on a chair.

On Jan. 27, he played 25 minutes against Oklahoma.

And here we are.

The conversation shifts from what Marcus Smart did in pushing a fan to what it will mean for him and Oklahoma State going forward, writes Eamonn Brennan. Story

Travis Ford could have helped Marcus Smart and instead the Oklahoma State coach failed him, writes Dana O’Neil. Story

Whatever private conversations Ford has had with his star player, however many extra wind sprints he may have run in practice, there has been no public reprimand or censure for a player whose behavior has been spiraling out of control.

At the very least, Smart shouldn’t have started against Oklahoma after kicking the chair. There should have been at least a smack on the wrist to say, ‘No, that’s not tolerated here.’ Would it have definitively stopped this train from wrecking? Maybe not, but it wouldn’t have hurt to try.

Instead Ford, in his sixth year in Stillwater with only one NCAA tournament win to show for it, opted to put on his blinders and hope that winning would cure everything.

Now he’s finding out the ironic twist in that plan: When you sacrifice everything for winning, including your own authority, you usually fail wildly. He let Smart walk all over him. He waited for Stevie Clark to commit his third strike before kicking him off the team last week. And now, he’s got a team that is, not surprisingly, deteriorating as rapidly as Smart’s reputation.

Ford is not unusual. Plenty, if not most coaches eventually find themselves at this intersection, standing between the right thing to do and the path to job security. The same idealism that promotes coaches making men out of players also pretends coaches aren’t fired for losing games. There inevitably will come a time in every career, then, when righteousness and self-preservation take root on opposite shoulders.

When you have the tenure and equity of, say, a Tom Izzo, it’s a lot easier to make the morally right decision as opposed to the ambiguous indecision. But for every coach who closed his eyes and crossed his fingers that things would work out, there are others who did the right thing, wins and losses be damned.

In 2011, two years after he took the job and long before the results came in, Josh Pastner in short order booted Pierre Henderson-Niles from the Memphis team, suspended Wesley Witherspoon indefinitely and parted ways with top recruit Jelan Kendrick before he played a second in a Tigers uniform.

Pastner and Memphis took their lumps, but the coach made his choice based on his convictions rather than this career arc.

Just this past year, Andy Kennedy suspended Marshall Henderson in July. He easily could have ended the suspension in the summer, or benched him for a few meaningless exhibition games. It would have paid lip service to the no-no behavior without potentially costing Kennedy any games.

Instead, he and Ole Miss opted to tag on two more games at the start of the SEC season, games that not only would affect the Rebels but also would — theoretically — send a louder message to Henderson that his behavior wasn’t OK. Until Saturday, Smart wasn’t guilty of anything as egregious as the Memphis players or Henderson were, but he certainly was toeing the line, pushing like a petulant teenager to see just how much he could get away with.

Ford never pushed back. Now he has been run over by a maelstrom that will live on in YouTube perpetuity and add a black eye to a team already in turmoil and disarray.

Smart, who engendered nothing but good will when he opted to return to college, will be remembered Whether he is good, bad or indifferent from here on out, an entire populace of casual fans will know him for nothing else but what he did in Lubbock.

That’s a stain and a stigma he will have to absorb, along with the hefty load of expectations he has been carrying all season.

But he shouldn’t have to carry it alone.

Marcus Smart was wrong, but where is Travis Ford?