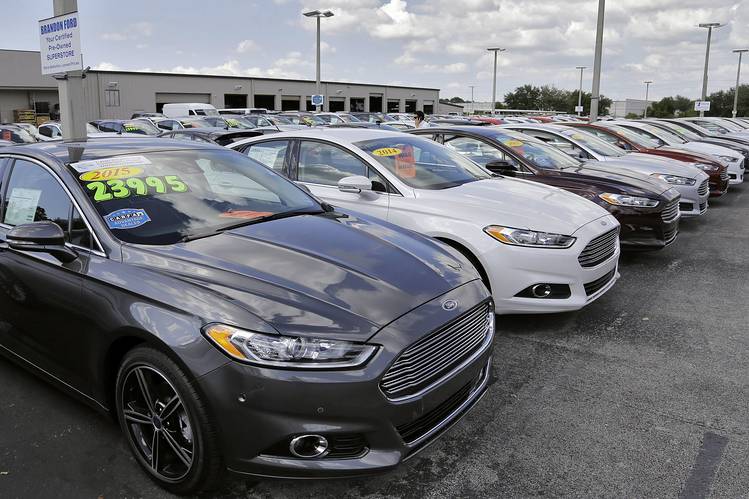 Average used-vehicle prices fell modestly in February compared with the same period a year ago, a trend that ratchets up pressure on auto makers spending more to keep the U.S. volumes at record highs.

Manheim Inc., an auction company tracking vehicle prices, said the average preowned vehicle wholesaled for $10,345, down 2% from the same month a year before. Adjusted for seasonal factors, prices fell 1.5% to $12,298, representing the second consecutive year-over-year decline in monthly prices.

While not eye-popping, the declines mark the beginning of what Cox Automotive Chief Economist Tom Webb says is a long-term trend of dropping resale values in the sector. “We expect pricing to fall over the next two years,” he said, as “much more supply [comes] in as vehicles come off their leases.”

Passenger cars are facing pressure, with large sedans falling 20%, compact cars slumping 10% and bread-and-butter family sedans falling 2% in February. Cars in these segments are popular among rental fleets, but low gasoline prices and demographic shifts are limiting appeal on the retail market.

Pickup truck values soared 7.4% to $16,125, one of the few segments with an increase. Pickup truck pricing has remained above the $16,000 mark since September 2015. Sport-utility vehicles registered a modest decline.

Publicly traded dealers have recently complained about pressure on gross margins and “the driving factor appears to be the growing glut of off-lease vehicles currently skewed toward sedans.”

Mr. Jonas said the index will hover at current levels in the near term as easy credit, strong new-car pricing trends and low fuel prices grease sales of new and used vehicles. Longer term, however, “we expect the used car prices to melt 10% to 15% from current levels,” he said.

Auto sales surged 6.9% in February to 1.34 million vehicles, prompting analysts to forecast another record year for industry volume north of the 17.5-million mark notched in 2015. More than 40 million used vehicles have been sold in recent years.

As new-vehicle incentives increase, it adds even more pressure on wholesale values. “More incentives is something no one wants to see,” Mr. Webb said.

Write to Jeff Bennett at jeff.bennett@wsj.com and John D. Stoll at john.stoll@wsj.com