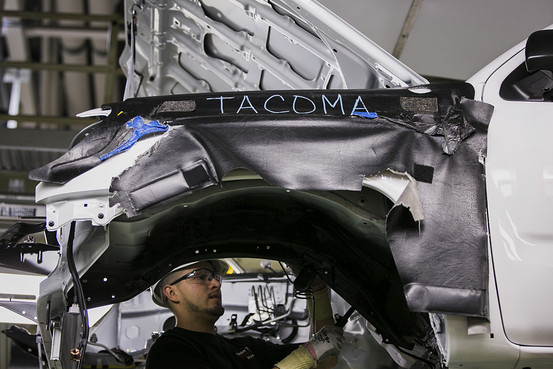 A worker adds components to the engine compartment of a Toyota Tacoma truck at the company’s manufacturing facility in San Antonio.
Bloomberg News

Toyota is recalling 6.39 million vehicles from across the globe, marking its biggest recall since 2012, when it recalled some 7.4 million. The latest news could deal a blow to the car maker’s reputation for quality control, but also will affect millions of consumers.

Here, some key facts about the recall and what Toyota car owners need to know.

What car models are involved in the recall?

What kinds of issues do the recalled models have?

Have these defects caused any accidents or injuries?

Engine-starter defects led two vehicles in Japan to catch fire, but Toyota said it wasn’t aware of any crashes, injuries or fatalities caused by the problems that prompted the latest recalls.

I own a Toyota. How do I find out if my car was recalled?

If you have a Toyota and it’s registered in the U.S, you can go to Toyota’s website and type in your vehicle’s 17-digit vehicle identification number. You can find your VIN number in a couple places: one your car insurance identification card, on your vehicle registration card, on your dashboard near the windshield on the driver’s side, or on the driver’s side doorjamb.

How do I get my car fixed, and will it cost me money?

Typically with recalls, the car manufacturer will fix the problem free of charge. Toyota says it is currently preparing remedies for the related defects in recalled vehicles in the U.S. Once preparations are complete, Toyota will send owners a notification letter by first class mail and the fix will be provided at no charge, the company said in statements Wednesday.

Why are there so many recalls lately?

As the WSJ’s Matthew Curtin reports, the auto industry is moving toward a modular method of making cars, where a common family of basic components are shared across multiple models. That simplifies the manufacturing process, enabling cheaper cars and much more efficient processes. But when something goes wrong, it can mean trouble on a much wider scale.

Car makers could be taking a more proactive approach to announcing recalls, as some have faced government scrutiny in recent years for not disclosing vehicle defects sooner. For example, just this week U.S. federal auto-safety regulators criticized General Motors Co. for failing to answer questions about its ignition-switch recall, fining the company $28,000 and warning it could seek stiffer penalties in federal court. GM has acknowledged employees knew of faulty ignition switches used in some cars for nearly a decade, but failed to recall the vehicles until this year, when it recalled 2.6 million of them.

In March, Toyota agreed to pay a $1.2 billion criminal penalty in a settlement with the U.S. Justice Department, after the company acknowledged having misled consumers about safety problems related to unintended acceleration of a number of its vehicles. Problems related to sudden acceleration resulted in the recall of millions of vehicles from 2009 through 2011.

On Wednesday, a Toyota spokeswoman in Tokyo said that the company issued five recalls simultaneously “in line with our policy to disclose safety-related issues promptly.” She said it had previously issued two or three recalls at once. 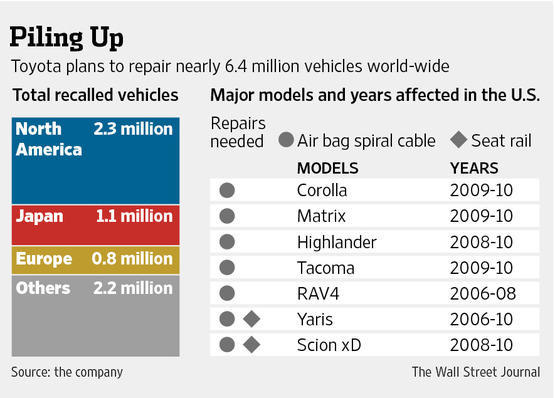