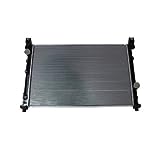 Ford (NYSE:F) CEO Mark Fields said that the company expects a “record” pre-tax profit for 2015, in the “upper half” of its recently revised guidance range of $10 billion to $11 billion. It also expects its 2016 pre-tax profit, excluding special items, to be “equal to or higher than” its 2015 full-year result.

The company also declared a $1 billion supplemental cash dividend, or $0.25 per share, on top of its regular first-quarter $0.15 per-share dividend.  It also said that it expects 2016 to be the year in which it finally turns a profit in its long-troubled European unit.

That all sounds like great news. The market’s reaction? The stock closed down just over 5% on Wednesday. What was that about?

A sell-off after good guidance for 2016 and a special dividend?
Generally speaking, for a long-term Ford investor, there’s lots to like about the news, which was first announced by Fields on Tuesday evening at a conference for investment analysts in Detroit.

Simply put, Fields and his team are expressing confidence that even though the U.S. new-car market may be plateauing, Ford has other plans in motion to generate profit growth. And it’s returning some of its very strong 2015 profit to shareholders.

So why the sell-off? It’s not entirely clear. But your humble Fool has an educated guess: I think some big shareholders were expecting Ford to raise the regular dividend on an ongoing basis. Ford raised its dividend by 20% in 2015.

General Motors‘ (NYSE:GM) stock rose after it made a similarly optimistic announcement about its 2016 earnings early on Wednesday — but instead of a special dividend, GM opted to boost its share-buyback efforts.

I think the decision to give Ford shareholders a one-time special payout without raising the regular dividend on an ongoing basis (and without announcing something like a share repurchase program) might have been a disappointment for some Ford investors.

If so, I understand that. But I also understand why Ford’s leaders chose to make the one-time dividend payment instead, and I think it makes sense from a long-term investing perspective — particularly given Ford’s unique ownership structure.

This is (probably) why Ford didn’t raise the dividend
Ford CFO Bob Shanks has said repeatedly that he wants Ford’s dividend to be “sustainable”. The company was forced to eliminate its dividend in 2007 as it struggled to survive, and the payments to shareholders weren’t reinstated until the first quarter of 2012.

Shanks and other Ford executives are mindful that the auto business is cyclical. As good as Ford’s sales look today, there will be another downturn at some point, and Ford’s profits will get squeezed. They want to keep the dividend at a level that they can continue to pay without hurting the business, even during that next downturn.

That’s partly about wanting to be able to continue to argue that Ford stock is worth owning, and that would be true at most well-run companies in similar situations. But there’s another concern when it comes to Ford, and that’s the Ford family.

The descendants of founder Henry Ford together own less than 2% of the company, but they control 40% of the votes through a special class of stock that was created just for them at the time of Ford’s initial public offering in 1956. Those shares, called Class B shares, have special voting rights.

But they typically receive the same dividends as Ford’s regular common stock, and preserving some level of payment through a downturn is likely a very high priority for some Ford family members. This announcement seems well-balanced between the desire to reward shareholders after an exceptionally profitably year, and the desire to ensure that Ford can continue to pay all shareholders, including Ford family members, a dividend through the next downturn.

The upshot: You don’t have to be a Ford to like a sustainable dividend
As a long-term shareholder who reinvests dividends, I’d rather see Ford be able to comfortably continue to make those $0.15 per share quarterly payments during a downturn, when the stock is likely to be cheaper than it has been recently.

I’d also, again speaking as a Ford shareholder, rather see Ford’s financial leadership be careful and conservative with the company’s money, even as it’s returning some of it to shareholders. Long story short, while these decisions might not have been popular with certain parties on Wall Street, they sit just fine with this humble Ford-owning Fool.

As for Wednesday’s sell-off? Let’s put it this way: If you’d like to own Ford or expand your position, here’s an opportunity.