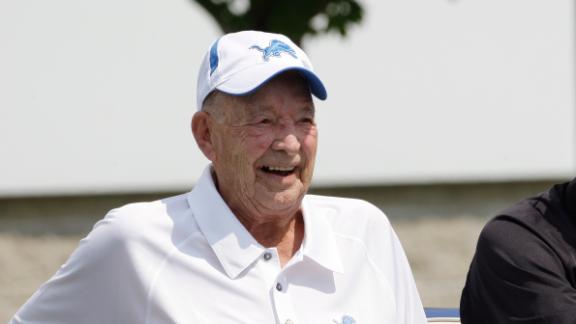 William Clay Ford Sr., the owner of the Detroit Lions, has died at the age of 88.

Ford Motor Co. said in a statement Sunday that Ford died of pneumonia at his home. He was the last surviving grandson of automotive pioneer Henry Ford and owned the Lions since 1964.

William Clay Ford Sr.’s legacy as owner of the Detroit Lions is one of passion and of a winning desire unfulfilled, Michael Rothstein writes. Blog>

“It is with profound sadness that we mourn the loss of Mr. Ford and extend our deepest sympathies to Mrs. Ford and to the entire Ford family,” Lions team president Tom Lewand said in a statement. “No owner loved his team more than Mr. Ford loved the Lions.

“Those of us who had the opportunity to work for Mr. Ford knew of his unyielding passion for his family, the Lions and the city of Detroit. His leadership, integrity, kindness, humility and good humor were matched only by his desire to bring a Super Bowl championship to the Lions and to our community.”

Ford originally paid $4.5 million in November 1963 for the Lions franchise, which is now valued at approximately $900 million, according to Forbes. He officially assumed ownership of the team in January 1964.

In Ford’s 50-year tenure as the Lions’ owner, the team has won one playoff game — in 1991 — and has never reached a Super Bowl. Ford was one of the quieter owners in the NFL, rarely speaking to the media. Much of the public speaking about the team had been done by his son, William Clay Ford Jr., in recent years.

Ford had one of the few NFL franchises that has yet to play in the Super Bowl. Under his ownership, the Lions had 14 winning seasons and 10 playoff appearances. 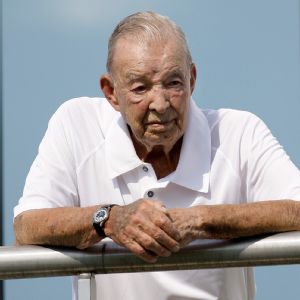 “For five decades, Mr. Ford’s passion for the Lions, Detroit, and the NFL was the foundation of one of the NFL’s historic franchises,” commissioner Roger Goodell said in a statement. “As an NFL owner, Mr. Ford helped bring the NFL through enormous periods of change and growth, always guided by his commitment to what was best for the NFL and his beloved Lions. All of us in the NFL extend our heartfelt sympathy to Mr. Ford’s wife Martha, Bill Ford, Jr. and the entire Ford family.”

Away from football, Ford worked for Ford Motor Co. for 57 years and was the chairman of the company’s design committee from 1957 until 1989. He was instrumental in the design decisions of many of Ford Motor’s cars in that span.

In 1978, he was named the chairman of the executive committee of Ford.

“My father was a great business leader and humanitarian who dedicated his life to the company and the community,” William Clay Ford Jr. said in a statement. “He also was a wonderful family man, a loving husband, father, grandfather and great-grandfather.

“He will be greatly missed by everyone who knew him, yet he will continue to inspire us all.”

While William Clay Ford Jr., who is the team’s vice chairman, is likely to take over running the franchise, the Lions did not want to indicate a path of succession for ownership Sunday.

“Today we are mourning the loss of Mr. Ford and reflecting on the impact that he had on the Lions and our community,” the team said in a statement Sunday afternoon. “Information related to ownership succession will be communicated at the appropriate time.”

“I am extremely saddened by the passing of Mr. Ford,” Stafford said in the statement. “He was a tremendous owner, as well as a respected and passionate leader of our football team. He gave me and many people in the city of Detroit an opportunity to be a part of something great. He was a joy to play for, and his love for the Lions and the city of Detroit will be something we all remember.

“My thoughts and prayers are with the Ford family, and I will always be thankful for the opportunity and the honor to play for Mr. Ford and his beloved Lions.”

Funeral services will be private, and Ford locations across the United States will lower Ford and American flags to half-staff for 30 days.

Legendary Lions running back Barry Sanders tweeted out his condolences.

Sending my thoughts and prayers to the Ford Family & @DetroitLionsNFL – Mr. Ford was a visionary that will be missed by us all.

As did Reggie Bush, the Lions’ current starting running back.

ESPN’s Darren Rovell and The Associated Press contributed to this report.