$52.53
Home › Blog › US Automotive News › Women gearing up for careers in the auto industry – The Boston Globe

Some customers didn’t know what to make of Samantha Briody when they saw her behind the parts counter at AutoZone in Weymouth.

“Is there a guy here?” they would ask.

Little did they know how well equipped she was to help them.

Briody, 21, recently graduated with a bachelor’s degree in automotive management from the Benjamin Franklin Institute of Technology in Boston, and just started a new position as a parts specialist at a Volkswagen dealership in Norwood.

But dealing with gender stereotypes is likely to remain part of her job. Even as the number of women taking automotive classes has remained steady or risen in schools around New England, the share of them working as mechanics and in auto parts sales has declined in recent years — reflecting a drop in females in many male-dominated industries.

But with technicians in demand, and women drivers outnumbering men, the automotive industry is doing more to attract women to the field — and keep them there.

The Automotive Women’s Alliance Foundation and the Car Care Council Women’s Board have attracted more corporate sponsorships in recent years, allowing them to greatly increase the number of scholarships they award.

Car makers, including General Motors Co., the first major automotive company to have a female chief executive, have laid out plans to recruit and better support female employees.

And the Automotive Industries Association of Canada released a report last month detailing the challenges women face in the industry and recommending ways to increase their numbers.

Automotive employers who come to the Benjamin Franklin Institute are increasingly seeking out women, especially to interact with customers, said Ashley Mansfield, director of student success at the school. With women involved in 80 percent of car-buying decisions, according to the research and consulting firm Frost & Sullivan, it makes sense to have more of them working in the industry, she said, not just to make female customers comfortable, but to capitalize on their communication and problem-solving skills and attention to detail.

Women make up only about 10 percent of approximately 150 automotive students at the Benjamin Franklin Institute, and to combat this lack of community, Mansfield recently helped form a women’s group where students meet to share stories of discrimination, hear from women in the industry, and travel to trade shows.

The women at the school may be far outnumbered by men, but they are serious about their education.

“The guys at the school just talk about how fast their cars are and don’t actually pay attention to the lesson,” said Cassie Olson, an 18-year-old Shrewsbury native who grew up helping her dad change the oil and is getting an associate’s degree in automotive technology. “The women actually want to hear the lecture.” 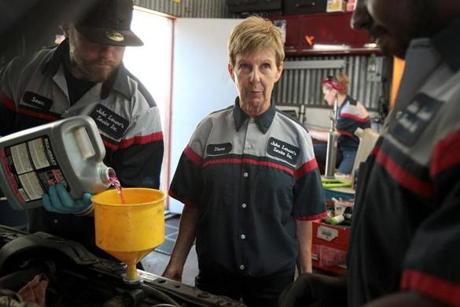 Diane Larson of Larson’s Service in Peabody says the business can still be tough for women.

Once they get out into the male-dominated workforce, however, many don’t last. The share of female mechanics has fallen 3 percentage points in the past 20 years, according to the Bureau of Labor Statistics. In wholesale and retail auto parts, the percentage of women has dropped by a similar amount. The number of women in managerial positions in the auto industry has also dipped.

This decline reflects an overall decrease in the number of women in traditionally male fields over the past few decades, including agriculture, coal mining, and manufacturing. The reason for this, said Anna Beninger, director of research at the women’s advocacy group Catalyst Inc., boils down to company culture.

“The old boy’s club is alive and well,” she said.

The gender gap is not limited to blue-collar jobs. Women who enter STEM fields — science, technology, engineering, and math — often start in lower-level positions and make less money than men from day one, said Beninger, who studied the gender divide among nearly 6,000 MBA graduates. Of those who do go into automotive, high tech, manufacturing, and other male-dominated fields, 53 percent of women left to work in another industry — compared to 31 percent of men — because they feel like outsiders, lack female role models, and experience both overt and unconscious discrimination.

But some areas of the automotive industry are retaining more female workers than in the past, including automobile sales. “It’s not the sons, it’s the daughters who are taking over the businesses,” said Melissa Steffy, general manager of Herb Chambers BMW of Boston.

And as cars become increasingly computerized, and the “grease monkey” stigma fades, repair work will become more accessible for women, too, said Kellie Treppa, a member of the Automotive Women’s Alliance Foundation board. “Brains can do it; you don’t necessarily need the brawn,” she said.

Diane Larson helped her husband open Larson’s Service in Peabody 30 years ago and took over the business after he died in 2008. Customers don’t hang up when she answers the phone like they used to, she said, but the industry can still be a tough place for women. When she was at a trade show with the 21-year-old son of another shop owner a few years ago, vendors automatically directed their comments to him.

But Larson’s shop is thriving, due in part to the innovative way she runs it. Customers come to her service station twice a year for prescheduled checkups, similar to a dentist’s office. This brings in regular business and keeps clients’ cars from breaking down. Women in particular love it. “You’re not going to end up with a dead battery or a light out or a fan belt breaking,” Larson said.

Incorporating women’s ideas are good for the industry, said Larson, who is grooming her female shop manager to take over in a few years.

Larson’s manager, Taylor Hill, 30, who has a degree in automotive management, said she was initially discouraged from getting into car repair. “It’s a guy’s world,” she recalls her father telling her. “You don’t want to deal with the hassle.”

It hasn’t been that bad, Hill said, but she has had to develop a thick skin — and to consider what it means when a man doubts her abilities.

“It’s more of an insecurity issue on their part,” she said, “because they may not know as much as I do.”